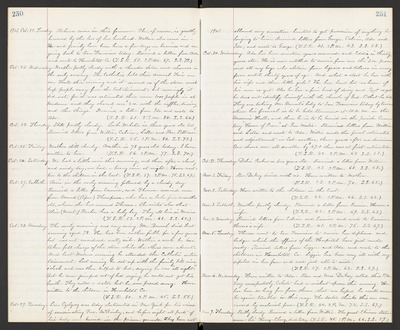 1901. Oct. 22. Tuesday. Rebecca came in this forenoon. She, of course, is greatly bereaved by the loss of her husband. Wallace also came in. He and family have been here a few days on business and are going back to San Francisco today. Received a letter from Ada and wrote to Humboldt Co. (T.S.R. 51. 2 P.M. 87. S.S. 79.)

Oct. 23. Wednesday. Weather partly cloudy with a thunder storm and showers in the early evening. The Catholic's held this Annual Fair in our Hall this evening and it seemed as if the storm must keep people away from the Entertainment, but seemingly it did not, for it was estimated there were 1000 people in attendance and they cleared over $200. with the raffles, dancing and other things. Received a letter from Ida and wrote to Ada. (T.S.R. 61. 2 P.M. 84. S.S. 66.)

Oct. 27. Sabbath. Rain in the early morning followed by a cloudy day. Received a letter from Eunice, and Theresa received one from Mand (Piper) Thompson, who has a babe five months old, whom she has named Theresa. She writes also that Alice (Mont.) Barber has a baby boy. They all live in Maine (T.S.R. 53. 2 P.M. 68. S.S. 62.)

Oct. 28. Monday. The early morning was very rainy. Mr. Bruml died last evening aged 78. He has been rather feeble for a few years but was not considered really sick. Within a week he has taken full charge of the store while the others were absent. And last Wednes. evening he attended the Catholic entertainment. Last evening he sat up with the family till nine o'clock and was then helped to bed, saying he was "all right." But he soon jumped out of bed saying he could not get his breath. They called a doctor but he soon passed away. Have written to the children in Humboldt Co. (T.S.R. 50. 2 P.M. 65. S.S. 55.)

Oct. 29. Tuesday. Leon Czolgosz was today electrocuted in New York for his crime of assassinating Pres. McKinley, and before night all part of his body were buried in the prison grounds. They have not

Oct. 30. Wednesday. Ada has bene nineteen years married and Eddie is thirty years old. He is now entitled to receive from me the $300. promised all my boys who abstain from liquors and tobacco in every form until thirty years of age. And what a start he has with his wife and three little girls! He has land but no house of his own as yet. Also he has a fine herd of dairy cows. But as yet he doe not identify himself with the church of God. O that he did. They are taking Mr. Bruml's body to San Francisco today by train where his funeral is to be held tomorrow at 10 A.M. in the Masonic Hall, and then he is to be buried in the Jewish Cemetery "Home of Peace" at San Mateo. Received letters from Willie and Lilla and wrote to Ada. Willie sends the final estimates and adjustments in Est. matters, three years after our division. Our shares are all smaller by $47.+ than was at first estimated. (T.S.R. 42. 2 P.M. 68. S.S. 61.)

Nov. 5. Tuesday. Theresa went to San Francisco to receive her diploma and badge which the officers of the Hospital have just made ready. Received letters from Lizzie and Ada and wrote to the children in Humboldt Co. Lizzie has been very ill with erysipelas in her face and was just able to write. (T.S.R. 47. 2 P.M. 63. S.S. 67.)

Nov. 6. Wednesday. Have written to Ada. Rev. and Mrs. DeKay called this P.M. Very unexpectedly, Celeste had a violent spasm this evening. He has been so long free from them that we hoped he would never be again troubled in this way. The doctor thinks this one was caused by malarial fever. (T.S.R. 44. 2 P.M. 74. S.S. 67.)