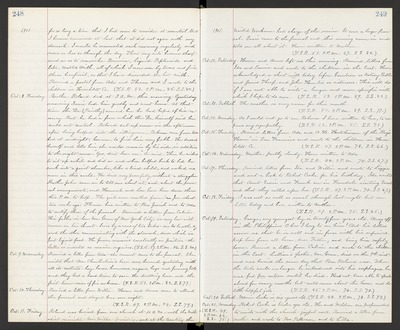 1901. for so long a time that I had come to consider it essential. But I became convinced at last that it did not agree with my stomach. I would be nauseated each morning regularly and more or less so through the day. Then my wits became sharpened so as to remember Bovinine, Liquid Peptonoids and later, Malted Milk, all of which I now use by turns and find them beneficial, so that I have discarded the hot milk. Received a postal from Ada and Theresa and I wrote to the children in Humboldt Co. (T.S.R. 53. 2 P.M. 85. S.S. 80.)

Oct. 8. Tuesday. Brother Roland died at 3 A.M. this morning. Yesterday morning Susie bade him goodby and went home. At that time the Dr. (Priestly) assured her he had hopes of his recovery. But he had a fever which the Dr. himself said he could not control. Roland sat up some in the afternoon after being helped into the sitting room. Rebecca rose from her bed at midnight, however, to find him very feeble. She dressed herself and told him she would remain by his side, in addition to the night nurse. "Yes, dont leave," he said. Then he wished to sit up awhile and did so, and when helped back to bed he sank into a quiet slumber, like a tired child, and waked no more in this world. He died very peacefully, without a struggle. Brother John came in to tell me about it, about the funeral arrangements, and Hannah and Lou have been down there this P.M. to help. The girls were recalled from San Jose about two weeks ago. Theresa has written to Bro. Josiah and to Ada to notify them of the funeral. Received a letter from Calvin. His father-in-law, Mr. Green of New York City, is very low with cancer in his throat - lives by means of two tubes - one to breathe by and the other communicating with the stomach, down which is put liquid food. The former remains constantly in position - the latter is inserted as occasion requires. (T.S.R. 57. 2 P.M. 86. S.S. 80.)

Oct. 9. Wednesday. Received a letter from Ada - she cannot come to the funeral. She writes that Mr. Chamberlain's burn was burned yesterday with all its contents - hay, horses, harnesses, wagons, hogs, and farming tools and they had a hard time to save the dwelling house and the fruit house - cause of fire unknown. (T.S.R. 51. 2 P.M. 82. S.S. 77.)

Oct. 11. Friday. Roland was buried from our church at 10 A.M. with the Methodist minister- Mr. Miller - presiding, and at the Cemetery the

Oct. 12. Saturday. Horace and Anna left us this morning. Received letters from Ida and Eunice and wrote to the children in the East. Have acknowledged a short will today before Garretson as Notary Public and James Thorp and John Hunter as witnesses. This will do if I am not able to write a longer and more specific will which I hope to do soon. (T.S.R. 53. 2 P.M. 89. S.S. 82.)

Oct. 17. Thursday. Received letters from Ida and Willie and wrote to Lizzie and sent a book to Robert Cooke for his birthday. Ida writes that Aunt Susie and Frank are in Ferndale visiting Sarah and that they called upon her. (T.S.R. 47. 2 P.M. 74. S.S. 67.)

Oct. 19. Saturday. George, my youngest boy, is twentyfour years old. Away off in the Philippines - O how I long to see him! But his letters assure us that he is well and in favor with his superiors. Keep him from all harm, dear Father, and bring him safely home. Received a letter from Calvin and wrote to the children in the East. Lillian's father, Mr. Green, died on the 9th inst. and was buried the same day that Bro. Roland was. Whom the tube could no longer be introduced into his esophagus, he was fed per rectum until he died. Had not been able to speak aloud for many months but could move about the house and do little helpful jobs. (T.S.R. 45. 2 P.M. 76. S.S. 70.)