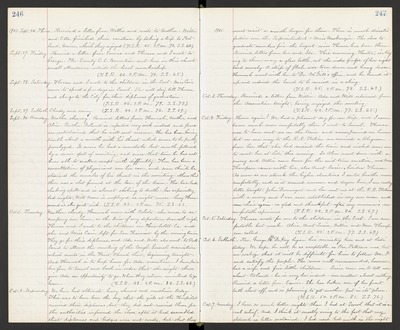 Sept. 30. Monday. Weather showery. Received letters from Hannah, Mother and Alice. Brother Roland is reported very sick indeed and fears are entertained that he will not recover. He has been having trouble about a month with his throat which seems to be partly paralyzed. It seems he had a sunstroke last month, followed by a severe spell of vomiting, and since that time he has not been able to swallow, except with difficulty. There has been a consultation of physicians over his case, and some think he strained the muscles of his throat in the vomiting - others that there was a clot formed at the base of the brain. He has bad choking spells and is almost choking to death - has especially bad nights. Will Moore is employed as night nurse. Lucy Hammond is also quite sick. (T.S.R. 42. 2 P.M. 75. S.S. 62.

Oct. 1. Tuesday. Weather cloudy. Hannah came with Celeste she comes to accompany me home, so the time of departure draweth nigh - Theresa and I wrote to the children in Humboldt Co. and she and Miss Cain left for San Francisco by the evening train. They go for their diplomas, and Ada and Will also went to Oakland to attend the meeting of the Congl. General Association which meets in the First Church there, beginning tonight. And Hannah is to keep house for Ada meantime. I have paid her fare to Sunol and back in order that she might thus give Ada an opportunity to go. When they return we intend to go home. (T.S.R. 48. 2 P.M. 80. S.S. 63.)

Oct. 2. Wednesday. We have alternate heavy showers and sunshine today. This was to have been the day that the girls at the Hospital received their diplomas, but they did not received them, for the authorities informed the class, after it had assembled that diplomas and badges were not ready, but that they

1901. must wait a month longer for them. There is much dissatisfaction over the Superintendent - Miss Markenzie. The class to graduate numbers five - the largest since Theresa has been there. Received letters from her and Ida. This morning, Hester, in trying to throw away a glass bottle, cut the index finger of her right hand severely. A strip of flesh was torn down and hung loose. Hannah went with her to Dr. McGill's office, and her bound it up, and ordered the hand to be carried in a sling. (T.S.R. 45. 2 P.M. 78. S.S. 62.)

Oct. 4. Friday. Home again! We had a pleasant day for our trip, and I came home much more comfortably than I went to Sunol. Theresa was to have met us on the train, and accompanied us home but on our way to the R.R. Station we received a telegram from her that she had missed the train and wished some one to meet her at Lodi this evening. So Alice went down with a surrey and Nellie came home for the mid-term vacation, and Mrs. Thompson came with her, also Aunt Susie, besides Theresa. As soon as we struck the higher elevations I could breathe more comfortably, and as it seemed warmer and dryer here, I am really better tonight. John Demangeot and Lou met us at the R.R. Station with a surrey and I was soon established in my own room and arm-chair again - so glad and thankful - after my summer's uncomfortable experiences. (T.S.R. 42. 2 P.M. 80. S.S. 67.)

Oct. 6. Sabbath. Rev. George H. DeKay began his ministry here and at Lodi today. We hope he will be as acceptable as Rev. Patterson was, but we realize that it will be difficult for him to follow Mr. P. and satisfy the people. He comes well recommended, however, has a wife and five little children. Susie came in to tell me about Roland - he is very low indeed - can swallow almost nothing. Received a letter from Eunice. She has broken one of her front teeth short off, and is planning to get another put in its place. (T.S.R. 50. 2 P.M. 81. S.S. 76.)

Oct. 7. Monday. I have so much better nights than I had at Sunol that it is a real relief. And I think it mostly owing to the fact that my stomach is better sustained. I had used hot milk in the night