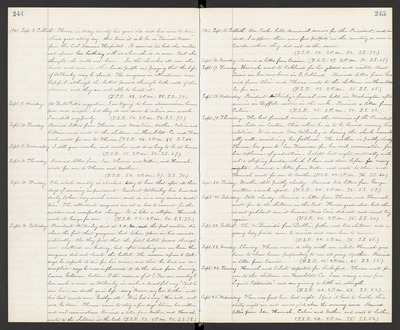 1901. Sept. 8. Sabbath. Theresa is today twenty-two years old and has come to her third graduating day - this time it is to be as "Trained Nurse" from the Cal. Womans' Hospital. It seemed too bad she could not spend her birthday with us when she is so near. But she thought she could not have. In the churches all over the land and even in other lands people are praying that the life of McKinley may be spaced. The surgeons in attendance are hopeful, although the bullet passed through both walls of the stomach and they are not able to locate it. (T.S.R. 48. 2 P.M. 88. S.S. 72.)

Sept. 13. Friday. The whole country is shocked today to hear that after all these days of seeming improvement President McKinley has been suddenly taken very much worse, and is in a very serious condition. The attendant surgeons are at a loss to account for the sudden and unexpected change. It is like a collapse. Hannah wrote to George for me. (T.S.R. 52. 2 P.M. 90. S.S. 77.)

Sept. 14. Saturday. President McKinley died at 2 A.M. and the post mortem discloses the fact that gangrene had taken place in his wounds internally. Also they find that the fatal bullet passed through and shattered one kidney, but after working over an hour the surgeons did not locate the bullet. The assassin refuses to talk - says he expects to die for his crime, and that he had no accomplices - says he was influenced to do the died from hearing Emma Goldman lecture. O the sadness of it! For our country to lose such a man as McKinley in such a dreadful way! But he was brave in death as in life - sang "Nearer, my God, to thee", and his last words were. "Goodbye all! It is God's way! His will, not ours, be done." Theresa came to stay a few days between her written and oral examinations. Received a letter from Mother, and Hannah wrote to the children in the East. (T.S.R. 52. 2 P.M. 95. S.S. 78.)

Sept. 19. Thursday. The last funeral services over the remains of the President were held in Canton, Ohio, where he is to be buried among his relatives. It is said Mrs. McKinley is bearing the shock remarkably well, considering her feebleness. The weather is partly cloudy. Theresa has gone to San Francisco for her oral examination for her diploma of graduation. I slept last night naturally with out a sleeping powder, which I have not done before for many nights. Received a letter from Willie and wrote to Alice and Hannah wrote for me to Mother. (T.S.R. 42. 2 P.M. 76. S.S. 60.)

Sept. 21. Saturday. Still cloudy. Received a letter from Theresa, and Hannah wrote for the children in the East. Theresa graduated, but she is not jubilant over it because Miss Cain did not and must try again. (T.S.R. 40. 2 P.M. 75. S.S. 60.)