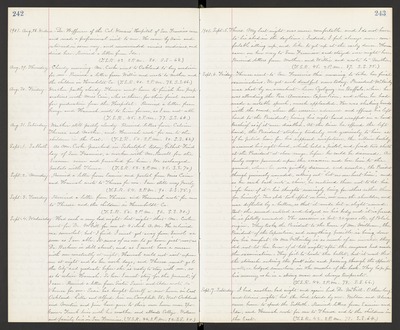 Aug. 30. Friday. Weather partly cloudy. Theresa went home to finish her preparations with Miss Cain, who is there, for their final exams for graduation from the Hospital. Received a letter from George and Hannah wrote to him for me, as I am not able. (T.S.R. 45. 2 P.M. 77. S.S. 64.)

Sept. 1. Sabbath. As Mr. Cooke preached in Sebastopol today, Gilbert Findlay of San Francisco, a worker with Mr. Rowell for the Seamen came and preached for him. We exchanged postals with Theresa. (T.S.R. 52. 2 P.M. 85. S.S. 70.)

Sept. 4. Wednesday. Had such a very bad night last night that Mr. Cooke went for Dr. McGill for me at 4 o'clock A.M. He relieved me somewhat, I find I must get away from Sunol as soon as I am able. It seems of no use to go home just now, as Dr. Barbour is still absent, and as I must have a nurse with me constantly at night, Hannah could not wait upon me at night and do her work days, and Theresa must go to the City and graduate before she is ready to stay with me, so as to relieve Hannah. So here I must stay for the present, if I can. Received a letter from Sister Susie and Ada wrote to Theresa for me. Susie has bought herself a new home in East Oakland. Lilla and Alfred live on Campbell Sl. West Oakland and Mertice and Jim have gone to their own home near Spokane. Frank lives with his mother and attends College. Wallace and family live in San Francisco. (T.S.R. 46. 2 P.M. 92. S.S. 80.)

1901. Sept. 5. Thurs. My last night was more comfortable and Ida not have to lie abed in the daytime. Indeed, I feel always more comfortable sitting up, and like to get up at the early down. Theresa came on her way to San Francisco and stayed over night here. Received letters from Mother and Willie and wrote to Mother. (T.S.R. 45. 2 P.M. 87. S.S. 75.)

Sept. 6. Friday. Theresa went to San Francisco this morning to take her final examinations. We got such dreadful news today. President McKinley was shot by an anarchist - Leon Czolgosz- in Buffalo, where he was attending the Pan-American Exposition, and where he had made a notable speech, much applauded. He was shaking hands with the crowd, when the assassin advanced and offered his left hand to the President, having his right hand wrapped in a handkerchief as if it were disabled. At the time he offered the left hand, the President stooping tenderly and graciously to him as if he pitied him for his supposed misfortune, the villain hastily uncovered his right hand, which held a pistol, and fired two shots at the President at close range, before he could be disarmed. A burly negro pounced upon the assassin and bore him to the ground, where he was quickly disarmed and arrested, the President though grievously wounded, calling out "Let no one hurt him", and as he sank back into a chair, he cautioned them not the let his wife hear of it - his thoughts seemingly bring for others rather those for himself. Two shots-took effect on him, one near the shoulder, and was deflected by a button, so that it made but a slight wound. But the second entered and lodged in his body and it is feared he is fatally wounded. The assassin is but 24 years old, of Polish origin. They took the President to the home of Mr. Milburn, the President of the Exposition, and everything possible is being done for his comfort. As Mrs. McKinley is so much of an invalid, they did not let her know of it till night, after the surgeons had made the examination. The fail to locate the bullet, but it went thro' the stomach entering the front side and passing through the opposite wall, is lodged somewhere in the muscles of the back. They hope for his recovery, as he is a strong man and always temperate. (T.S.R. 44. 2 P.M. 78. S.S. 66.)

Sept. 7. Saturday. I had another bad night and again had Dr. McGill. O these long and tedious nights, but the Lord stands by me. Weldon and Alma came home to spend the Sabbath. Received letters from Eunice and Ida, and Hannah wrote for me to Theresa and to the children in the East. (T.S.R. 42. 2 P.M. 78. S.S. 64.)