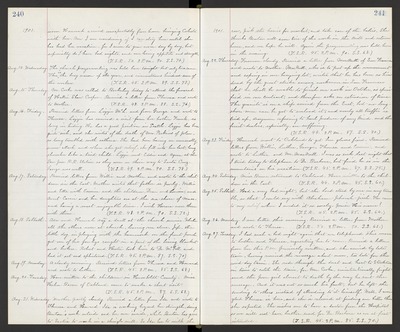 1901. Hannah arrived unexpectedly from home bringing Celeste with her. Now I am wondering if I can stay here until she has had her vacation, for I seem to grow worse day by day, but especially do I have bad nights, and am losing appetite and strength. (T.S.R. 50. 2 P.M. 90. S.S. 74.)

Aug. 16. Friday. Received letter from Lizzie McL. and from George and wrote to Theresa. Lizzie has received a visit from her brother Frank, so long in hiding. He has a good position in Seattle. Lizzie has been quite sick, and she writes of the death of Mrs. Perkins of Jolon, so long troubled with asthma. She had been having an unusually severe attack and whom she got relief, she fell into her last, long slumber like a tired child. Lizzie met Eddie and Agnes at the San Jose R.R. Station as they were on their way to Santa Cruz. George was well. (T.S.R. 49. 2 P.M. 90. S.S. 78.)

Aug. 17. Saturday. Received letters from Willie and Mother and wrote to the children in the East. Mother writes that father is poorly. Willie and Etta with Eunice and the children, Dean and Louise, and Aunt Carrie and her daughters are at the sea-shore of Mass. and having a most enjoyable time. I wish Horace were there with them. (T.S.R. 48. 2 P.M 90. S.S. 72.)

Aug. 18. Sabbath. Ada and Hannah sang a duet at the church service. While all the others were at church, leaving me alone. Jip, the little dog, in playing with the hammock on the front porch got one of his fore legs caught in a part of the lining blanket and broken. Robert and Hester took him to Dr. McGill and had it set and splintered. (T.S.R. 45. 2 P.M. 87. S.S. 70.)

Aug. 21. Wednesday. Weather partly cloudy. Received a letter from Ida and wrote to Theresa and Howard. Ida is working beyond her strength, doing Benton's work outside and her own inside, while Benton has gone to Scotia to work in a shingle mill. So Ida has to milk the

Aug. 22. Thursday. Forenoon cloudy. Received a letter from MacNutt of San Francisco and wrote to Mother. MacNutt, who is to put up the monument and coping in our burying lot, writes that he has been so hindered by the great strike among workmen in San Francisco that he shall be unable to finish our work in October, as specified in our contract, and therefore asks an extension of time. he granite is on a ship arrived from the East, but no long-shore-men can be got to unload it, and nearly all traffic is tied up, draymen refusing to haul produce of any kind, and the fruit-dealers, especially, are suffering. (T.S.R. 44. 2 P.M. 87. S.S. 80.)

Aug. 23. Friday. Hannah went to Oakland to get her glasses fixed. Received letters from Willie, Luther, George, Theresa and Eunice, and wrote to Luther and Mr. MacNutt. I was so sick last night that I tried today to telephone to Dr. Barbour, but find he is in the mountains on his vacation. (T.S.R. 45. 2 P.M. 87. S.S. 75.)

Aug. 27. Tuesday. I had such a bad night again that we telephoned this morn to Luther and Theresa, requesting her to come. Received a letter from this P.M. previously written, and she arrived by late train, having received the message about noon, too late for the mid-day train. She rode through the dust and heat to Stockton in time to catch the train, for Mr. Cooke, unintentionally frightened the poor girl almost to death by the way he sent the message. And it was not so much his fault, but he left the sending to others instead of attending to it himself. Well, I am glad Theresa is here, and she is relieved at finding me better than she expected. She wishes me to have a doctor from the Hospital so we will not have Luther send for Dr. Barbour as we at first intended. (T.S.R. 45. 2 P.M. 85. S.S. 70.)