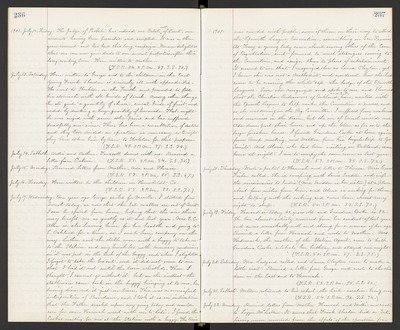 1901. July 12. Friday. The Judge of Probate has ordered our Estate out of Court, our accounts having been presented and accepted. It was a three years account and has had this long campaign. We are delighted that we can now give deeds to our several properties, after this long waiting time. Have written to Mother. (T.S.R. 54. 2 P.M. 87. S.S. 70.)

July 13. Saturday. Have written to George and to the children in the East. Young Frank Sherden is seriously ill with appendicitis. He went to Stockton on the Fourth and proceeded to fill his stomach with all kinds of "truck". Among other things he ate quite a quantity of cheese, several kinds of fruit, and ended by drinking a large quantity of lemonade. That night he was seized with severe colic pains and has suffered dreadfully ever since. There has been a consultation of doctors and they have decided an operation is necessary, so tonight they have taken him by train to Stockton for that purpose. (T.S.R. 49. 2 P.M. 87. S.S. 74.)

July 17. Wednesday. One year ago George sailed for Manila. I started for Sunol today, as now that the Est. matters are out of Court I can be spared from home, hoping that the air there may benefit me as greatly as it did last year. Mrs. E.C. Allen is alo leaving home for her health and going to E. Oakland for a time, so I am to have company on the way. Luther sent the stable man with a buggy to take me to the Station and my lunch-box with necessary medicine in it was put in the back of the buggy and when I alighted - I forgot to take, the box out, and it did not occur to me that I had it not until the train whistled. Then I thought, I cannot go without it, but on the instant the stableman came back in the buggy bringing it to me, he having discovered it just in time. This was a merciful interposition of Providence, and I took it as an indication that the Father smiled upon my going today and would care for me. Hannah went with me to Lodi. I found the Cookes waiting for me at the Station with a buggy. The train

1901. was crowded with people, some of them on their way to attend the Epworth League Convention, assembling in San Francisco. At Tracy, a young lady came aboard among others of the Com. of Registration, such forward to meet strangers coming to the Convention, and assign them to places of entertainment. It seemed to me that I recognized her as Laura Clayton, yet I knew she was not a Methodist, and wondered how she had come to be wearing the white cap - the badge of the Epworth Leaguers - Soon she recognized and spoke to me and I learned that the Christian Endeavorers of Oakland and S.F have united with the Epworth Leaguers to help make the Convention a success, and so she was serving on the Reg. Committee. I suffered from weakness and weariness on the train, but he air of Sunol revived me. Ada drove past their house and up the Glen as far as to the large forsaken house. I found Grandma Cooke at home again from Camp meeting, and Weldon from his bicycle trip to Yo Semite. And Alma, who had been visiting in Oakland, came home at night. I am to occupy the same room as last year. (T.S.R. 53. 2 P.M. 85. S.S. 72.)

July 18. Thursday. Wrote a postal to Hannah and letter to Theresa. Miss Grace Fisher called. She is camping with Lewis Scudder and wife - the missionaries to India (Mrs. Scudder is her sister) at a place about four miles from here, and Alma is working for them and helping with the cooking, and comes home almost every night to sleep. (T.S.R. 50. 2 P.M. 83. S.S. 70.)

July 19. Friday. Howard is today 42 years old and Grandma Cooke is 82. She has almost entirely recovered from her accident of last year and seems remarkably well and strong for a woman of her age. Received a letter from Hannah and wrote to Mother. Mrs. Hedemack, the mother of the Station Agent, came to help Grandma Cooke celebrate her birthday, and stayed over night. (T.S.R. 50. 2 P.M. 87. S.S. 75.)

July 22. Monday. Received letters from Mother, Hannah and Willie and wrote to Lizzie McLellan. It seems that Frank Sherden died on Sat. having never recovered from the effects of the operations for