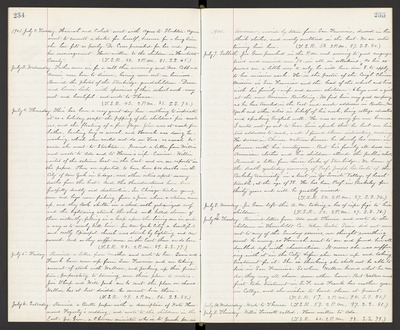 1901. July 2. Tuesday. Hannah and Celeste went with Agnes to Stockton. Agnes went to consult a doctor for herself, because for a long time she has felt so poorly. Dr. Cross prescribed for her and gave her encouragement. Have written to the children in Humboldt County. (T.S.R. 48. 2 P.M. 81. S.S. 65.)

July 3. Wednesday. Father came in for a call this morning and Mrs. Coff and Annie were here to diner, having came out on business. Received the photos of the Sturbridge grandchildren - Dean and Louise Locke - with specimens of their school work - very neat and beautiful - and wrote to Theresa. (T.S.R. 43. 2 P.M. 81. S.S. 72.)

July 4. Thursday. This has been a very quiet day here - nothing to indicate it as a holiday except the popping of the children's fire-crackers, and the floating of a few flags - John was at work for Luther, hauling hay as usual, and Hannah was doing [?] washing, which she could not do on Tues. as usual because she went to Stockton. Received a letter from Willie and wrote to Ada and to Horace's wife - Eunice. Willie writes of the extreme heat in the East and we see reports in the papers. There are reported to have been 600 deaths in the City of New York in 6 days, and other cities report many deaths from the heat. And the thunder-storms have been fearfully deadly and destructive. In Chicago twelve young men and boys were fishing from a pier where a storm came up, and they took shelter in a shed with galvanized roof and the lightning struck the shed and killed eleven of them instantly, falling in a heap upon the living one in such a way as to nearly kill him. In New York City a beautiful and costly Episcopal church was struck by lightning and consumed. And so they suffer more in the East than we do here. (T.S.R. 48. 2 P.M. 89. S.S. 77.)

July 5. Friday. Received a letter from Mother and wrote to her. Susie and Frank have come up from San Francisco and are taking account of stock with Wallace, and packing up their furniture, preparatory to turning over their place to renters. Jim Thorp and Will Jack are to rent the place on shares. Wallace has at last decided he cannot live there. (T.S.R. 49. 2 P.M. 96. S.S. 83.)

July 6. Saturday. Received a Butte paper with a description of Kate Hammond Fogarty's wedding, and wrote to the children in the East. Jee Gam, a Chinese minister who is preach for us

July 7. Sabbath. Jee Gam preached in the P.M. and evening to good congregations and received over $12. in all in collections. As his expenses are a little over $4. only, he will have over $8. to apply to his mission work. He is the pastor of the Cong'l Chinese Mission in San Francisco and the head of the school and lives with his family - wife and seven children - 6 boys and a girl at the new Mission Building. We find him very good company as he has traveled in the East and made addresses in Boston, New York and other cities in behalf of his work, being college educated and speaking English well. He was so sorry for me because I could not go out to hear him speak that he lent me his two addresses to read, and I found them interesting reading. He dresses in Chinese costume because he thereby has more influence with his countrymen. But his family all dress in American clothes and his children attend the public school. Received a letter from Louise Locke of Sturbridge. We learn of the death yesterday morning of Prof. Joseph Le Conte of the Berkeley University in a tent in Yo Semite Valley, of heart trouble, at the age of 78. He has been Prof. in Berkeley for thirty years and will be greatly missed. (T.S.R. 50. 2 P.M. 87. S.S. 74.)

July 9. Tuesday. Received letters from Ada and Theresa and wrote to the children in Humboldt Co. When Sister Susie did not come out to any of the Sunday services, we thought something must be wrong, so Hannah went to seen and found her all doubled up with rheumatism. It seems she is suffering with it in the City before she came up and taking treatment for it. She is thinking she shall not be able to live in San Francisco. So when Wallace knows what he can do, they may all choose some other home. But Wallace must first take treatment in S.F. and Frank has another year in College, and she wishes to board them at present. (T.S.R. 57. 2 P.M. 94. S.S. 81.)