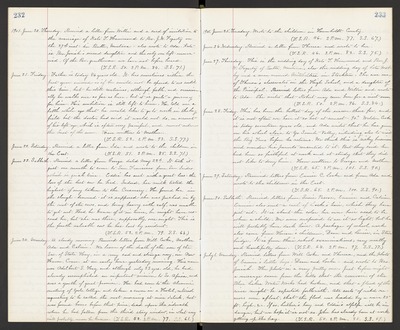 June 21. Friday. Father is today 86 years old. It has sometimes within the past year seemed as if he would not be spared to us until this time, but he still continues, although feeble, and occasionally he walks over as far as here, but it is quite a journey for him. His ambition is still left to him. He told me a little while ago that he would like to go to work in the hay field but the doctor had said it would not do, on account of his left eye, which is often very painful, and cannot endure the heat of the sun. Have written to Mother. (T.S.R. 52. 2 P.M. 93. S.S. 77.)

June 23. Sabbath. Received a letter from George dated May 22d. It took it just one month to come to San Francisco from San Isidro which is quick time. Eddie has met with a great loss, the loss of the best cow he had. Indeed, her milk tested the highest of any taken to the Creamery. He found her in the slough-drowned - it is supposed she was pushed in by the rest of the cows, and being heavy with calf, was unable to get out. Had he known of it in time, he might have rescued her, but she was there, supposably, over night. This is the fourth valuable cow he has lost by accident. (T.S.R. 52. 2 P.M. 79. S.S. 68.)

June 24. Monday. A cloudy morning. Received letters from Will Cooke, Mother Ada and Calvin. We learn of the death of the son of the Sec. of State Hay, in a very sad and strange way, in New Haven, Conn. at an early hour yesterday morning. His name was Adelbert S. Hay, and although only 23 yrs. old, he had already accomplished an important mission to So. Africa, and was a youth of great promise. He had come to the Alumni meeting of the Yale College and taken a room in a Hotel, retired requesting to be called the next morning at nine o'clock, but was found hours before that time, dead upon the sidewalk where he had fallen from the third story window, in what way will probably never be known. (T.S.R. 52. 2 P.M. 77. S.S. 61.)

June 27. Thursday. This is the wedding day of Kate T. Hammond and Rev. J. W. Fogarty of Butte, Montana, also the wedding day of Lota Mobley and a man named Mitcheltree in Stockton. She was one of Theresa's classmates in the High School, and a daughter of the Principal. Received letters from Ada and Willie and wrote to Ada. She writes that Robert may come here for a visit soon. (T.S.R. 50. 2 P.M. 96. S.S. 84.)

June 28. Friday. This has been the hottest day of the season thus far, and it is not often we have it so hot at sunset - 90-. Weldon Cooke is today seventeen years old, and Ada writes that he has gone on his wheel alone to Yo Semite Valley, intending also to visit the Big Trees before he returns. We think this is risky business and wonder his parents consented to it. But they said he had been so faithful at work and at study that they did not like to deny him. Have written to George and Mother. (T.S.R. 65. 2 P.M. 101. S.S. 90.)

June 30. Sabbath. Received letters from Susie Pascoe, Eunice and Calvin. Eunice also sent a curl of Locke's hair. which they have just cut. It is about the color her own hair used to be when a child. We were surprised to see it so light, but he will probably have dark hair. A package of school work also came from Horace's children, Dean and Louise, in Sturbridge. It is from their school examinations, very neatly and beautifully done. (T.S.R. 64. 2 P.M. 97. S.S. 77.)

July 1. Monday. Received letters from Will Cooke and Theresa, and the photo of Eunice's little boys - Dean and Locke - and wrote to Bro. Josiah. The photo is a very pretty one. Just before night a message came from the hills that the reservoir of the Blue Lake Water Works had broken, and that a flood of the river might be expected forth with. All sorts of wild rumors were afloat, that the flood was headed by a wave 25 ft. high, &.c. If so, Luther's hay and Eddie's alfalfa will be in danger, but we hope it is not so. John has already been at work getting up the hay. (T.S.R. 50. 2 P.M. 85. S.S. 69.)