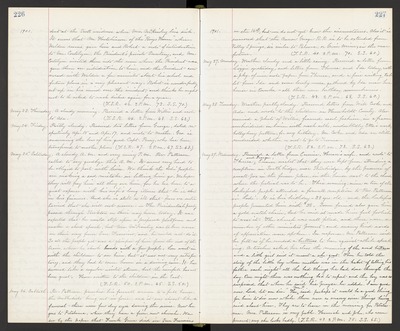 1901. at the Scott residence where Mrs. McKinley lies sick. It seems that Mr. Hutchinson of the "Boys Home" where Weldon rooms, gave him and Robert a note of introduction to Mr. Cortelyou, the President's private Secretary, and Mr. Cortelyou invited them into the room where the President was, gave them an introduction to him, and the President conversed with Weldon a few minutes about his school and future plans in a very pleasant way. Robert is wonderfully set up in his mind over the incident, and thinks he ought not to be asked to wash dishes again for a year. (T.S.R. 46. 2 P.M. 73. S.S. 70.)

May 25. Saturday. A cloudy A.M. and very rainy P.M. Rev. Patterson called to say goodbye this A.M. It seems very hard to be obliged to part with him. We think the Lodi people are making a sad mistake in letting him go. We hope they will pay him all they owe him, for he has been to so great expense with his wife's long illness that he is short in his finances. And she is still so ill that fears are entertained that she will not recover. The Presidential party passed through Stockton on their way home today. It was expected that he would step upon a prepared platform and make a short speech, but Mrs. McKinley was taken worse on their way from San Francisco, and he could not do it. So all the people got was a glimpse of him from the end of the train, where he shook hands with a few people. Lou went in with the children to see him, but it was not very satisfactory, and they had to come home in a driving rain. It has seemed like a regular winter storm, but the rainfall has not been great. Have written to the children in the East. (T.S.R. 50. 2 P.M. 65. S.S. 50.)

May 26. Sabbath. Rev. Patterson preached his farewell sermon to a full house, the Methodists being out in force, and it was almost like a funeral - there were few dry eyes during the service. Now he goes to Petaluma, where they have a fine, new church. We see by the paper that Frank Greve died in San Francisco

May 27. Monday. Weather cloudy and a little rainy. Received a letter from Lizzie yesterday, and letters from Theresa and Ida today, with a pkg. of nice note paper from Theresa, and a fine writing tablet from Ida and some lovely moss gathered by Ida near her house in Eureka, all these were birthday remembrances. (T.S.R. 48. 2 P.M. 68. S.S. 60.)

May 28. Tuesday. Weather partly cloudy. Received letters from Will Cooke and Ada and wrote to the children in Humboldt County. Also received a photo of Willie, framed easel fashion, in a frame embroidered on linen with wash silks, undoubtedly Etta's work, holly bury pattern, for my birthday. Mr. Cooke and Ada are still undecided whether or not to go to Tacoma. (T.S.R. 52. 2 P.M. 73. S.S. 63.)

May 29. Wednesday. Received a letter from Eunice, Horace's wife, and wrote to Theresa and George. Eunice writes that they were kept from attending a reception in South bridge, near Sturbridge, by the presence of small-pox in the former place, in the house next to the church where the festival was to be. This evening, nine or ten of the Lockeford people attended a farewell reception to Rev. Patterson in Lodi. It is his birthday - 38 yrs. old - and the Lockeford people presented him with $38. Some friend also gave him a gold watch chain, but he said it made him feel foolish to wear it. The church was well filled, and there were a number of other ministers present, and many kind words of appreciation were spoken. In response, Mr. Patterson said he felt as if he needed a buttress to lean against while speaking. A teacher asked her class the meaning of the word buttress and a little girl said it meant a she-goat. Then he told the story of the little boy whose mother was in the habit of telling his father each night all the bad things he had done through the day. One night there was nothing bad to report and the boy was so surprised that when he said his prayer, he added, "I am good now, Lord, let me die." He Mr. P. said perhaps it would be a good thing for him to die now while there were so many nice things being said about him. They are to leave in the morning for Petaluma. Mrs. Patterson is very feeble. Hannah and John, who were present, say she looks badly. (T.S.R. 48. 2 P.M. 75. S.S. 65.)