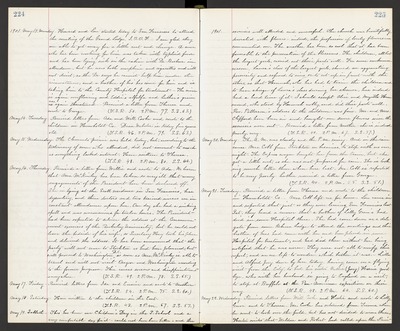 1901. May 13. Monday. Howard and Lou started today to San Francisco to attend the meeting of the Grand Lodge. I.O.O.F. I am glad they are able to get away for a little rest and change. A man who has been working for him was taken with typhoid fever and has been lying sick in the cabin with Dr. Barbour in attendance, but he uses both morphine and cigarettes and will not desist, so the Dr. says he cannot help him under the circumstances, and a brother of his has come for him and is taking him to the County Hospital for treatment. The river is again overflowing and Eddie's alfalfa and Luther's grain are again threatened. Received a letter from Theresa and wrote to George. (T.S.R. 50. 2 P.M. 77. S.S. 63.)

May 15. Wednesday. The Clements picnic was held today, but, according to the testimony of some who attended, did not amount to much as everything lacked interest. Have written to Theresa. (T.S.R. 48. 2 P.M. 80. S.S. 64.)

May 16. Thursday. Received a letter from Willie and wrote to Ada. We learn that Mrs. McKinley has been taken so very ill that many engagements of the President have been declared off. She is lying at the Scott residence in San Francisco, has dysentery, and three doctors and two trained nurses are in constant attendance upon her. One day she had a sinking spell and was unconscious for twelve hours. The President had been expected to deliver the address at the Commencement exercises of the Berkeley University, but he could not leave the bedside of his wife, so Secretary Hay took his place and delivered the address. It has been announced that the party will not come to Stockton as had been planned, but will proceed to Washington D.C. as soon as Mrs. McKinley is able to travel and will not visit Oregon and Washington according to the former program. This causes sorrow and disappointment everywhere. (T.S.R. 49. 2 P.M. 78. S.S. 65.)

May 19. Sabbath. This has been our Children's Day in the S. School and a very comfortable day for it - could not have been better - and the

1901. exercises well attended and successful. The church was beautifully decorated with flowers - indeed, the profession of lovely flowers was commented on. The weather has been so cool that it has been favorable to the presentation of the blossoms. The children, all but the largest girls, carried out their parts well. For some unknown reason, Laura's class of the largest girls, showed an aggravating perversity and refused to sing or to sit up in front with the others, as that Hannah, who has had to train the children and to have charge of Laura's class during her absence, has indeed had a hard time of it. I should except Alice and Myrtle Hammond, who stood by Hannah nobly, and did their parts well. Rev. Patterson's address to the children was fine. Mr. and Mrs. Clifford have been in and brought me some flowers since the exercise were out. Received a letter from Mother - she is indeed poorly, very. (T.S.R. 40. 2 P.M. 67. S.S. 57.)

May 20. Monday. The A.M. was cloudy and the P.M. rainy. And in the rain came Mrs. Cobb from Stockton on business, to stop with us over night. The Express wagon brought her from the train, but she got a little wet, as she was not prepared for rain. She is looking much better than when here last. Mr. Cobb is reported to be very poorly. Luther received a letter from George. (T.S.R. 40. 2 P.M. 55. S.S. 51.)

May 21. Tuesday. Received a letter from Theresa and wrote to the children in Humboldt Co. Mrs. Cobb left us for home. Lou came in and reported that just as they were leaving San Francisco last Sat. they heard a rumor that a brother of Lilly Greve's had died in some Hospital there. She had come down as a delegate from some Rebecca Lodge to attend the meetings and this brother of hers had come with her and been placed in some Hospital for treatment, and had died there without her being notified that he was worse. They were not able to verify this report, and we are left to wonder which brother it was. Lilla and Alfred Jory drove by here today, having come on a flying visit from the City, to bid his sister Nellie (Jory) Harris goodbye, who with her husband is going to England on a visit, to stop at Buffalo at the Pan-American exposition on their way. (T.S.R. 48. 2 P.M. 64. S.S. 60.)

May 22. Wednesday. Received letters from Will Cooke and Hester and wrote to Lilly Greve and to Theresa. Mr. Cooke has returned from Tacoma where he went to look over the field, but has not decided to move there. Hester writes that Weldon and Robert had called upon the President