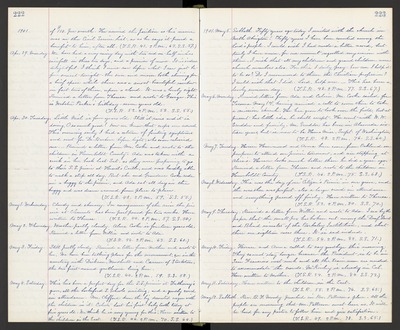 Apr. 29. Monday. We have had a very rainy day with two and one-half inches rainfall in these two days, and a promise of more. It is indeed delightful. I think I never saw before what I saw just before sunset tonight - the sun and moon both shining for a brief space while there was a most beautiful rainbow in fact two of them, upon a cloud. It was a lovely sight. Received a letter from Theresa and wrote to George. This is Webster Parker's birthday - seven years old. (T.S.R. 52. 2 P.M. 58. S.S. 55.)

Apr. 30. Tuesday. Little Niel is four years old. Still it rains and it is doing, O so much good! Now we know that crops are assured. This morning early I had a return of fainting symptoms and sent for Dr. Barbour before light, who soon relieved me. Received a letter from Mr. Cooke and wrote to the children in Humboldt County. Ada was taken with a crick in her back last Sat. as they were preparing to go to their S.S. picnics at Hearst's Castle, and was hardly able to walk a step all day. But she and Grandma Cooke rode in a buggy to the picnic, and Ada sat all day in the buggy and was drawn around from place to place. (T.S.R. 48. 2 P.M. 59. S.S. 55.)

May 3. Friday. Still partly cloudy. Received a letter from Mother and wrote to her. We have been talking plans for the monument; &.c. in the cemetery with Dickson, Woodhull and Cramer of Stockton, the two first-named gentlemen being here. (T.S.R. 44. 2 P.M. 59. S.S. 58.)

May 4. Saturday. This has been a perfect day for the S.S. picnic at Tretheway's grave, all the Lockeford S. Schools uniting, and a goodly crowd in attendance. Mr. Clifford drove the big decorated wagon with the children in it. Celeste lost his first baby tooth today at five years old. We think he is very young for this. Have written to the children in the East. (T.S.R. 46. 2 P.M. 70. S.S. 64.)

1901. May 5. Sabbath. Fifty years ago today I united with the church in North Abington! Fifty years I have been counted among the Lord's people. I could wish I had made a better word, but truly I have never, for one moment regretted my union with them. I wish that all my children and grand children were church members also. For this I daily pray - how can I help it, to be so? Do I recommend to them the Christian profession? I could wish that I did. Lord, help me. This has been a lovely summer day. (T.S.R. 48. 2 P.M. 77. S.S. 67.)

May 6. Monday. Received letters from Ada and Calvin. Mr. Cooke sailed for Tacoma May 1st, having received a call to come there to take a mission church. He has gone to look over the field, but at present has little idea he shall accept. He went with W.W. Scudder and family. Mr. Scudder has been in Alameda sixteen years, but is now to be Home Miss. Supt. of Washington. (T.S.R. 48. 2 P.M. 76. S.S. 64.)

May 7. Tuesday. Horace Hammond and Anna have come from Oakland on purpose to attend our picnic tomorrow, and are stopping at Alice's. Horace looks much better than he did a year ago. Received a letter from Theresa and wrote to the children in Humboldt County. (T.S.R. 46. 2 P.M. 75. S.S. 68.)

May 8. Wednesday. This was the day of our "Citizen's Picnic" in our grove, and the weather was perfect also a large crowd in attendance and everything passed off finely. Have written to Theresa. (T.S.R. 52. 2 P.M. 80. S.S. 70.)

May 9. Thursday. Received a letter from Willie and wrote to Ada. I see by the paper that the small pox has broken out among the Deaf, Dumb and Blind inmates of the Berkeley Institution, and that there are eighteen cases there. It is sad indeed. (T.S.R. 54. 2 P.M. 82. S.S. 71.)

May 10. Friday. Horace and Anna called to say goodbye this morning. They cannot stay longer because the President is to be in San Francisco next week and all the train men are needed to accommodate the crowds. McKinley is already is Cal. Have written to Mother. (T.S.R. 54. 2 P.M. 84. S.S. 72.)