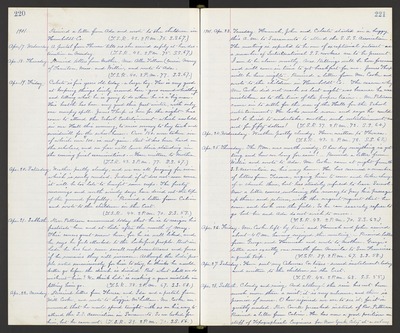 Apr. 19. Friday. Celeste is five years old today - a large boy. He is very good at keeping things lively around here - goes around whistling and telling what he is going to do when he is a "big man". His health has been very good this past winter, with only one croupy spell. James Thorp is here for the night - has come to attend the School Entertainment which was held in our Hall this evening, to raise money to buy tank and windmill for the school house. Over $150. were taken in of which over $100. is net gain. But is has been hard on the scholars, and we fear will lower their standing in the coming final examinations. Have written to Mother. (T.S.R. 43. 2 P.M. 77. S.S. 67.)

Arpr. 20. Saturday. Weather partly cloudy, and we are all praying for rain which is sorely needed. Indeed if it does not soon come it will be too late to benefit some crops. The frosty mornings and north windy days have dried out the top of the ground fearfully. Received a letter from Calvin and wrote to the children in the East. (T.S.R. 44. 2 P.M. 70. S.S. 57.)

Apr. 21. Sabbath. Rev. Patterson announced today that he is to resign his pastorate here and at Lodi after the month of May. This causes great sorrow here, for he is well liked, and he says he feels attached to the Lockeford people. But in Lodi he has had some small unpleasantnesses and fears if he remains they will increase. Although the Lodi people voted unanimously for him to stay, he thinks he would better go before the church is divided. But what shall we do without him? We think Lodi is making a grave mistake in letting him go. (T.S.R. 38. 2 P.M. 67. S.S. 58.)

Apr. 22. Monday. Received letters from Theresa and Ida and a postal from Will Cooke, and wrote to Lizzie McLellan. Mr. Cooke announced that he would spend tonight with us on his way to attend the S.S. Association in Sacramento. So we looked for him, but he came not. (T.S.R. 39. 2 P.M. 70. S.S. 56.)

1901. Apr. 23. Tuesday. Hannah, John and Celeste started in a buggy this A.M. to Sacramento to attend the S.S.S. Association. The meeting is expected to be one of exceptional interest as a number of International S.S. workers are to be present. I am to be alone mostly. Mrs. Billings will be here forenoon and will come in time to get breakfast for me. James Thorp will be here nights. Received a letter from Mr. Cooke and wrote to the children in Humboldt Co. The reason why Mr. Cooke did not reach us last night was because he was mistaken as to the time of the proper train. Mr. Peterson came in to settle for the use of the Halls for the School entertainment. He looks much worn and says he could not be hired to undertake another such entertainment, [?] not for fifty dollars! (T.S.R. 37. 2 P.M. 72. S.S. 64.)

Apr. 25. Thursday. The P.M. was north windy. O how day everything is getting and how we long for rain! Received a letter from Willie and wrote to Ada. Mr. Cooke came at night from the S.S. Association on his way home. He has received a number of letters from Tacoma, urging him to come and take charge of a church there, but has steadily refused to leave Sunol. Now a letter comes enclosing the money to pay his passage up there and return, with the urgent request that he come and look over the field. So he can scarcely refuse to go but he and Ada do not wish to move. (T.S.R. 43. 2 P.M. 70. S.S. 63.)

Apr. 26. Friday. Mr. Cooke left by train and Hannah and John arrived about 4 P.M. having enjoyed the meeting. Received letters from George and Hannah and wrote to Mother. George's letter was exactly one month from Manila to San Francisco, a quick trip. (T.S.R. 39. 2 P.M. 67. S.S. 58.)

Apr. 28. Sabbath. Cloudy and rainy. And although the rain has not been much more than a mist, it is very welcome, and there is promise of more. O how rejoiced we are to see it, for it is greatly needed. Rev. Cowell preached instead of Rev. Patterson. Received a letter from Calvin. He has now a good position on staff of Topographical Engineers for New York City at a salary