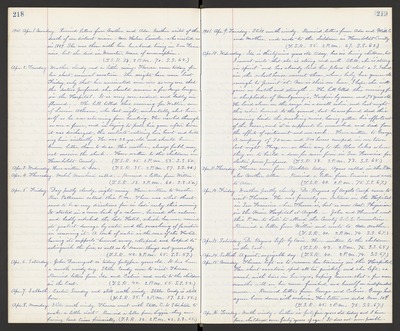 Apr. 2. Tuesday. Weather cloudy and a little rainy. Theresa came today for her short, annual vacation. She might have come last Friday, only that her vaccinated arm was so very sore that the doctors preferred she should remain a few days longer in the Hospital. It is very sore indeed and badly inflamed. The bell tolled this morning for Walter, son of Lucien Athearn, who last night, accidentally shot himself as he was returning from hunting. He crawled through or over a fence, and in trying to pull his gun after him it was discharged, the contents entering his heart and killing him instantly. He was 22 yrs. old and should have know better than to do so. His mother, always feeble, may not survive the shock. Have written to the children in Humboldt County. (T.S.R. 45. 2 P.M. 55. S.S. 50.)

Apr. 5. Friday. Day partly cloudy, night rainy. Have written to Mother. Rev. Patterson called this P.M. There was what threatened to be a very disastrous fire in Lodi early this morning. It started in a room back of a saloon, burned the saloon and badly scorched the Lodi Hotel, which however received its greatest damage by water and the smashing of furniture in removing it. A tank of water in the rear of the Hotel, having its supports burned away, collapsed and helped to extinguish the fire, as well as to drown things out generally. (T.S.R. 42. 2 P.M. 65. S.S. 57.)

Apr. 6. Saturday. John Demangeot is today forty four years old. It has been a north windy day. Stella Condy came to visit Theresa. Received letters from Ida and Calvin and wrote to the children in the East. (T.S.R. 40. 2 P.M. 55. S.S. 52.)

Apr. 10. Wednesday. Ida is thirtynine years old today, has six living children, but I cannot write that she is strong and well. Still, she is "strong in spirit" and has already laid her plans to start a S. School in the school house nearest them, when baby has grown old enough to permit it. Now in their new home, I hope she will gain in health and strength. The bell tolled this morning for a sheepherder of Montgomery's, Turpin by name and 75 years old. He lived alone on the range in a small cabin, and last night this cabin burned to the ground, but he was found dead this morning beside the smoking ruins, having gotten his effects out of the house, and it is supposed he overworked and died from the effects of excitement and over-work. Have written to George. A company of 70 men and 300 horses camped in our town last night. They are on their way to the Blue Lakes where they are to build a dam for some firm in San Francisco for electric power purposes. (T.S.R. 38. 2 P.M. 73. S.S. 65.)

Apr. 12. Friday. Weather partly cloudy. Dr. Raynes of Angels Camp came to visit Theresa. He was formerly an Interne in the Hospital in San Francisco where Theresa is, but is now Asst. Physician in the Mine Hospital at Angels. John and Hannah went this P.M. to Lodi to attend the County S.C.E. Convention. Received a letter from Willie and wrote to Mother. (T.S.R. 40. 2 P.M. 74. S.S. 67.)

Apr. 15. Monday. Theresa left us to resume her training in the Hospital. Her short vacation sped all too quickly and she left, as usual, with tears in her eyes, hoping however that a few more months will see her course finished, and herself an independent nurse. Received letters from George and Calvin. George had again been down with malaria. His letter was dated Mar. 10th. (T.S.R. 45. 2 P.M. 75. S.S. 67.)

Apr. 16. Tuesday. North windy. Luther is fortyfive years old and I have children over forty years of age! It does not seem possible.