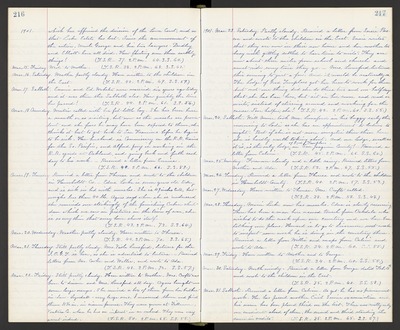 1901. which has affirmed the decision of the Lower Court, and so that Locke Estate has lost. Since the commencement of the action, Uncle George and his two lawyers - Dudley and Elliott - have all died. How fleeting seem these earthly things! (T.S.R. 37. 2 P.M. 64. S.S. 60.)

Mar. 18. Monday. Mertice called with her fat little boy. She has been here a month or so visiting, but now as the measles are prevalent and she fears he may have been exposed to them, she thinks it best to get back to San Francisco before he begins to be sick. Her husband is Commissary on the R.R. trains for the So. Pacific, and Alfred Jovy is working in the R.R. yards at Oakland, and going back and forth each day to his work. Received a letter from Eunice. (T.S.R. 40. 2 P.M. 66. S.S. 58.)

Mar. 19. Tuesday. Received a letter from Theresa and wrote to the children in Humboldt Co. Edna Locke is seven years old today and is sick in bed with measles. She is 49 inches tall, but weighs less than 40 lbs. Agnes says when she is undressed she reminds one strikingly of the famishing Cuban children which we saw in pictures in the time of war, she is so very thin that every bone shows itself. (T.S.R. 43. 2 P.M. 73. S.S. 64.)

Mar. 22. Friday. Still partly cloudy. Have written to Mother. Mrs. Crofts was here to dinner and Mrs. Lunsford all day. Agnes brought me some large oranges. She received a box of them from her brother-in-law - Lyndall - very large ones. I measured them and find them 11 1/2 in. in circumference. They were grown at Fillmore, Ventura Co. where he has an interest in an orchard. They were very sweet indeed. (T.S.R. 50. 2 P.M. 65. S.S. 55.)

1901. Mar. 23. Saturday. Partly cloudy. Received a letter from Susie Pascoe and wrote to the children in the East. Susie writes that they are now in their new home and her mother too busy with getting settled to have time to write. They are now about three miles from school and church and must ride every time they go. Mrs. Lunsford lectured this evening to just a few. And it would be naturally so. The Lodge of Good Templars got her here to work for them but not one thing did she do these two and one-half days that she has been here, but sit in her room and read or write, instead of stirring around and working for the cause. Poor helper, she! (T.S.R. 42. 2 P.M. 60. S.S. 55.)

Mar. 24. Sabbath. Will Moore took Mrs. Lunsford in his buggy early this morning to Lodi as she has an appointment to lecture to night. But if she is not more energetic there then here she is hardly worth taking about. And our Lodge, small as it is, is the only Lodge of Good Templars in San Joaquin County! Received a letter from Calvin. (T.S.R. 45. 2 P.M. S.S. 60.)

Mar. 28. Thursday. Marie Locke now has measles. Edna is slowly recovering. There has been a man here named Busch from Oakdale who wishes to do the work upon our cemetery and we have been talking over plans. Howard is to go to Livermore next week to inspect some work he is doing in the cemetery there. Received a letter from Willie and maps from Calvin and wrote to Ada. (T.S.R. 34. 2 P.M. 60. S.S. 55.)

Mar. 31. Sabbath. Received a letter from Calvin. As yet he has no permanent work. He has passed another Civil Service examination and his name has been placed third on the list. There was really only one candidate ahead of them, the second and third standing the same in credits. (T.S.R. 35. 2 P.M. 65. S.S. 57.)