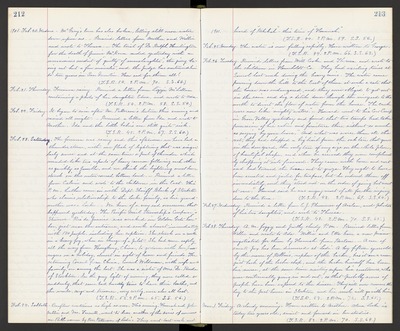 1901. Feb. 20. Wednes. McGary's levee has broken, letting still more water down upon us. Received letters from Mother and Willie and wrote to Theresa. The trial of Dr. Ralph Huntington for the death of Jennie McKown ended yesterday with a unanimous verdict of "guilty of manslaughter", the jury being out but a few minutes, and the Judge has sentenced him to ten years in San Quentin. How sad for them all! (T.S.R. 54. 2 P.M. 70. S.S. 64.)

Feb. 23. Saturday. The forenoon was rainy and this afternoon we have had a thunderstorm, with one flash of lightning that was singularly severe and at the same time a peal of thunder which sounded like two reports of heavy cannon following each other as quickly as possible, and we think the lightning must have struck in the water-covered bottom land. Received a letter from Calvin and wrote to the children in the East. This P.M. Luther came in with Dept. Sheriff Black of Stockton who claims relationship to the Locke family, as his grandmother was a Locke. We hear of a very sad occurrence that happened yesterday. The Pacific Mail Steamship's Company's Steamer - Rio de Janeiro - was wrecked in Golden Gate harbor, just near the entrance, and sank almost immediately with 130 people, including her captain. She struck on a rock in a heavy fog, when in charge of a pilot. She had come safely all the way from Hongkong, China, to go down with her passengers on a holiday, almost in sight of home and friends. The returning consul from China, Consul Wildman, with wife and family, are among the lost. She was a sister of Mrs. Dr. Beede of Stockton. In the gray light of morning, they were called so suddenly, that some had hardly time to leave thin berths, and the mails, cargo and treasure, very costly, were also all lost. (T.S.R. 55. 2 P.M. 65. S.S. 56.)

Feb. 24. Sabbath. Overflow continues as high as ever. This evening, Hannah and John Nettie and Mr. Truscott, went to hear another of the series of sermons on Bible women by Rev. Patterson of Lodi. They went last week and

Feb. 26. Tuesday. Received letters from Will Cooke and Theresa and wrote to the children in Humboldt Co. They had exciting times at Sunol last week during the heavy rains. The water came pouring down the hill to the East of them at such a rate that the house was endangered, and they were obliged to get out in the rain and dig a ditch down through the vineyard to the north to divert the flow of water from the house. The creek roars now like "mighty waters." Howard went to his Cow Camp in Goose valley yesterday and found that two tramps had taken possession of his cabin and furniture there without so much as saying "by your leave," and what was worse than all the rest, they had chopped a big limb from the oak tree that grows in the door yard, the only tree of any size on the whole place, of beautiful shape, and when he arrived they wore complacently chopping it into firewood. They came with horse and cart and had turned the horse out to graze. They ought to have been arrested and jailed for trespass, but he ordered them off immediately, and they "stood not on the order of going but went at once." Howard said he was angry most of all for the injury done to the tree. (T.S.R. 48. 2 P.M. 69. S.S. 64.)

Feb. 28. Thursday. A.M. foggy and Partly cloudy P.M. Received letter from Willie and wrote to Ada. Willie and Etta have a new piano negotiated for them by Hannah from Boston. A case of small-pox has been discovered at Lodi. A boy fifteen years old by the name of Robbin's, nephew of the barber, has it in a room just back of the barber shop, and the barber himself has been his nurse, at the same time waiting upon his customers, who was continually going in and out, so that probably scores of people have been exposed to the disease. They will now remove the boy to the pest house in Stockton and his uncle will go with him. (T.S.R. 53. 2 P.M. 72. S.S. 65.)