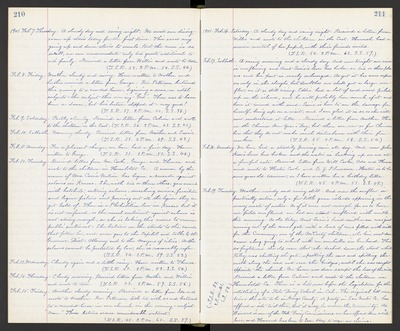 1901. Feb. 7. Thursday. A cloudy day and rainy night. We used our dining-room up-stairs today for the first time. This saves my going up and down stairs to meals. But the room is so small, we can accommodate only two guests additional to our family. Received a letter from Willie and wrote to Ada. (T.S.R. 32. 2 P.M. 50. S.S. 46.)

Feb. 8. Friday. Weather cloudy and rainy. Have written to Mother and Luther received a letter from George. Rev. Patterson lectured this evening to a crowded house, beginning a series on vital subjects - the subject this evening - "God". There was to have been a dance, but his lecture stopped it - very good! (T.S.R. 37. 2 P.M. 40. S.S. 38.)

Feb. 12. Tuesday. Received letters from Mr. Cooke, George and Theresa and wrote to the children in Humboldt Co. A woman by the name of Mrs. Carrie Nation has begun a crusade against saloons in Kansas. She, with two or three others, goes around with hatchets, entering saloons, smashing mirrors, furniture and liquor fixtures and pouring out all the liquor they can get hold of. There is a Prohibition law in Kansas but it is not enforced, as the moral sentiment against saloons is not strong enough, so she is taking this means to arouse public sentiment. She lectures on the streets to the crowds that follow her, and even goes to the Capitol and talks to the Governor, Dist. Attorney and to the Mayors of cities. As the saloons cannot be protected by law, she is reasonably safe. (T.S.R. 34. 2 P.M. 59. S.S. 53.)

Feb. 15. Friday. Another cloudy morning. Received a letter from Ida and wrote to Mother. Rev. Patterson took tea with us and lectured to a crowded house in our church in the evening - subject - "Man". These lectures arouse considerable interest. (T.S.R. 45. 2 P.M. 62. S.S. 57.)

Feb. 17. Sabbath. A rainy morning and a cloudy day. And now tonight our river is overflowing and Aunt Susie's levee has broken in two or three places and her part is nearly submerged. As yet it has come upon us only in the sloughs, but doubtless we shall get a large overflow, as it is still rising. Eddie had a lot of cord wood piled up on the island, and he will probably lose much of it and have it covered with sand. Susie is here to see the damage for herself, being up on a visit, and I am glad it is so, as she will now understand it better. Received a letter from Mother. This is the Chinese New Year's Day, but there are now so few Chinese here that they do not make much disturbance with their firecrackers. (T.S.R. 45. 2 P.M. 58. S.S. 54.)

Feb. 18. Monday. We have had a steadily pouring rain all day. And now John Kerr's levee has broken and the water is backing up on us at a fearful rate. Received letters from Will Cooke, Ada and Theresa and wrote to Hester Cooke and E.J. Plummer. Hester is to be seven years old tomorrow, so I have written her a birthday letter. (T.S.R. 45. 2 P.M. 51. S.S. 49.)

Feb. 19. Tuesday. Weather windy and rainy still. And now the overflow is practically entire, only a few little green islands appearing in the weary waste of waters. As if it were not enough for us to have our fields overflowed we had our street overflowed with milk this morning. As old Riley, Aunt Susie's hired milkman was just coming out of the corral gate with a load of cans filled with milk for the Creamery, one of the McCarty children, who live next door came along going to school with an umbrella in her hand. this so frightened the old man that she dashed down the street while Riley was shutting the gate, upsetting the cans and spilling the milk along the road and over the bridges, until she was caught opposite the church. No harm was done except the loss of the milk. Received a letter from Calvin and wrote to the children in Humboldt Co. There is a bill now before the Legislature for the establishing of a State Dairy School in Cal. The original bill mentions the site to be in Kings County. A party in San Mateo Co. has offered a site to it there, that it may be nearer the University. As Howard is one of the State Dairy Commissioners, we have offered them a site here, and Howard has been to Sac. today urge our claims. (T.S.R. 53. 2 P.M. 61. S.S. 58.)