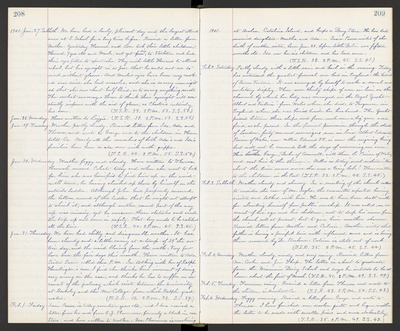 1901. Jan. 27. Sabbath. We have had a lovely, pleasant day and the largest attendance at S. School for a long time before. Received a letter from Mother. Yesterday Howard and Lou took their little children - Howard, 7 yrs. old and Merle, not yet six, to Stockton and had their eyes fitted to spectacles. They wish little Howard to attend school, but his eyesight is so poor that he could not see to read without glasses. And Merle's eyes have been very crooked ever since she had measles, and she is so very near sighted that she was about half blind, as to seeing anything small. The oculist encourages them to think their eyesight will constantly improve with the aid of glasses, as Chester's certainly has done. (T.S.R. 33. 2 P.M. 53. S.S. 53.)

Jan. 29. Tuesday. Weather partly cloudy. Received letters from Ida, Ada and Theresa, and wrote to George and to the children in Humboldt Co. Nearly all the members of both Ada's and Ida's families have been or are non-sick with grippe. (T.S.R. 44. 2 P.M. 55. S.S. 52.)

Jan. 30. Wednesday. Weather foggy and cloudy. Have written to Theresa. Hannah missed Celeste today and when she went to look for him she was horrified to find him up on the windmill tower, he having climbed up there by himself on the outside ladder. Although John had purposely removed the bottom round of the ladder that he might not attempt to climb it, and although another round part of the way up was missing, yet he overcome those obstacles and made the trip up and down in safety. That boy needs to be watched all the time. (T.S.R. 40. 2 P.M. 45. S.S. 45.)

Jan. 31. Thursday. We have had chilly and disagreeable weather. It has been cloudy and a little rainy at a temp. of 39- the entire day, and the wind blowing from the north. Very few have been the fair days this month. Have written to Ada. Sister Susie called this P.M. In talking with her of Ralph Huntington's case, I find she thinks him innocent of doing any wrong in the case, and thinks he has to suffer on account of the jealousy which exists between the University at Berkeley and the New College from which Ralph graduated. (T.S.R. 39. 2 P.M. 39. S.S. 39.)

Feb. 1. Friday. Susie Pascoe is today seventeen years old, and I have received a letter from her and from E.J. Plummer, formerly a clerk in our Store, and have written to Mother. Mr. Plummer is now living

Feb. 2. Saturday. Partly cloudy, with a little rain and hail in the evening. Today has witnessed the greatest funeral ever had in England - the burial of Queen Victoria. It was arranged by herself to make a naval and military display. There were thirty ships of war in line on the channel by which her body was conveyed in the Royal Yacht - "Albert and Victoria" - from Wales where she died, to Frogmore in England where she was buried beside her husband. The Yacht passed between these ships, and from each one a big gun was fired, as she passed. In the funeral procession through the streets of London, forty crowned sovereigns were in line. Albert Edward Prince of Wales, now called Edward VII, is now the reigning king but will not be crowned till the days of mourning are over. His son George, Duke of Cornwall, will then be Prince of Wales, and next heir to the throne. Nellie is today "sweet sixteen". How short the time seems since she was a tiny babe! Have written to the children in the East. (T.S.R. 32. 2 P.M. 48. S.S. 45.)

Feb. 3. Sabbath. Weather cloudy and showery. In a meeting of the church called to consider the case of Mr. Inglis, the committee reported having visited and talked with him. He was to have been dealt with for absenting himself from public worship. It was voted, on account of his age and his children, not to drop his name from the church roll at present, but to give him another chance. Received letters from Mother and Calvin. Mother writes that father is having a painful time with inflamed corns and is having them removed by Dr. Barbour. Calvin is still out of work. (T.S.R. 35. 2 P.M. 45. S.S. 44.)

Feb. 4. Monday. Weather cloudy, windy and very rainy. Received letters from Mr. Cooke and Jim Thorp. the latter is about to graduate from the Wisconsin Dairy School and says he intends to be at home about the first of March. (T.S.R. 41. 2 P.M. 49. S.S. 49.)

Feb. 6. Wednesday. Foggy morning. Received a letter from George and wrote to Theresa. I have finished one woolen quilt and begun another the latter to be made with smaller pieces and more elaborately. (T.S.R. 35. 2 P.M. 49. S.S. 43.)