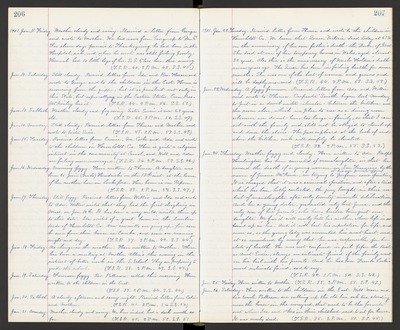 Jan. 12. Saturday. Still cloudy. Received letters from Ida and Bro. Horace and wrote to George and to the children in the East. Horace is recovering from the grippe, but it is prevalent not only in this State, but especially in the Eastern States. Even Pres. McKinley has it. (T.S.R. 44. 2 P.M. 56. S.S. 52.)

Jan. 15. Tuesday. Received letters from Eunice, Mr. Cooke and Ada and wrote to the children in Humboldt Co. There is quite a religious interest in the community at Sunol, and Will and Ada are feeling more encouraged. (T.S.R. 36. 2 P.M. 53. S.S. 46.)

Jan. 17. Thursday. Still foggy. Received letters from Willie and Ida and wrote to Ada. Willie writes that they had the first sleighing in Mass. on Jan. 12th. It has been a very mild winter there up to this date. Ida writes of a great boom in the lumber trade of Humboldt Co. New saw mills are going up - five can be seen from their house in Eureka, and some are running night and day. (T.S.R. 37. 2 P.M. 44. S.S. 44.)

1901. Jan. 22. Tuesday. Received letter from Theresa and wrote to the children in Humboldt Co. We learn that Queen Victoria died today at 6:30 on the anniversary of her own father's death - the Duke of Kent. She died at one of her temporary homes in Wales, aged almost 82 years. Also this is the anniversary of Uncle Holden's death - seven years ago. The Queen has been in failing health for some months. She was one of the best of women and queens and will be deeply mourned. (T.S.R. 44. 2 P.M. 58. S.S. 52.)

Jan. 23. Wednesday. A foggy forenoon. Received letters from Ada and Willie and wrote to Theresa. Carpenter Smith began last Monday to put in a dumb waiter - elevator - between the kitchen and the room above, which we plan to use as a dining room whenever we do not have too large a family, so that I can eat with the family and still not be obliged to climb up and down the stairs. The pass cupboard at the back of and above the kitchen sink will simply be elevated. (T.S.R. 38. 2 P.M. 55. S.S. 53.)

Jan. 24. Thursday. Weather foggy and cloudy. Have written to Ada. Ralph Huntington has been convicted of manslaughter, in that he caused the death of a young woman in San Francisco by the name of Jennie McKown, in trying to perform some operation at his own private office. It is charged that it was criminal operation, and after a trial which has been hotly contested, the jury brought in their verdict of manslaughter after only twenty minutes deliberation. And he a young doctor, graduated only Last June, and the only son of his parents, who have besides him just one daughter. We fear it will nearly kill his mother, whose life is so bound up in his. And it will bast his reputation for life, and more so, as the young lady was accounted his sweetheart, and it is considered by many that he was responsible for her state of health. He was not confined in jail before the trial as Aunt Susie, always an intimate friend of the family, went on his bail with his parents. And he has been Frank Locke's most intimate friend, sad to say. (T.S.R. 40. 2 P.M. 50. S.S. 48.)

Jan. 26. Saturday. Have written to the children in the East. Will Moore and his Uncle Patterson are cutting up the old live oak tree standing near the house in the vineyard, that used to be the favorite sent where Ida and Others in their childhood used to sit for hours. It was nearly dead. (T.S.R. 35. 2 P.M. 51. S.S. 45.)