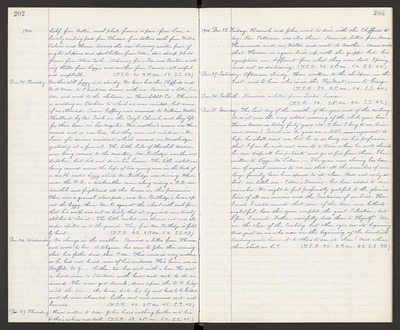 1900. hdkf. from Nellie, easel photo frames - a pair - from Lou, a lovely writing pad from Theresa, five dollars each from Willie, Calvin and Horace towards the new dummy waiter, pair of night slippers and spool holder from Ada, star stamp photo frame from Alma Cooke, stationery from Ida and Benton, a rolling blotter from Lizzie and another from Eunice - all useful and acceptable. (T.S.R. 40. 2 P.M. 52. S.S. 50.)

Dec. 25. Tuesday. Weather still foggy and cloudy. We have had the Clifford and Will Moore to Christmas dinner with us. Received a letter from Ada and wrote to the children in Humboldt Co. There was a wedding in Stockton to which we were invited, but none of us attended. Susie Geffroy was married to William Walter Hubbard by Rev. Sink in the Congl. Church, and they left for their home in Los Angeles. His mother's name was Hammond and so was hers, but they were not relatives. We learn of a serious accident which occurred in Woodbridge yesterday at a funeral. The little babe of Hershel Mason was being carried to the cemetery. Mr. Rutledge was the undertaker, but did not drive his hearse. The little casket was being carried across the laps of two young men in the back of a double-seated buggy which Mr. Rutledge was driving. When near the R.R. a trackwalker came along riding a R.R. automobile and frightened all the horses in the procession. There was a general stampede, and Mr. Rutledge's horse upset the buggy, threw Mr. R. against the wheel with such force that his scalp was cut so badly that it required over twenty stitches to close it. The little casket was thrown out and the corpse spilled on to the ground. They fear Mr. Rutledge is fatally hurt. (T.S.R. 43. 2 P.M. 54. S.S. 47.)

Dec. 26. Wednesday. No change in the weather. Received a letter from Theresa and wrote to her. A telegram has come to John this evening that his father died this P.m. This news is very sudden as he had not heard even of his sickness. His home was in Buffalo, N.Y. - Luther, too, has met with a loss. He sent a hired man to Stockton with horse and cart to do an errand. The man got drunk, drove upon the R.R. bridge with the team, the horse broke his leg and had to be killed, and the man absconded. Luther sent and recovered cart and harness. (T.S.R. 43. 2 P.M. 45. S.S. 43.)

1900. Dec.28. Friday. Hannah and John went to dine with the Cliffords today. Rev. Patterson was also there. Received letters from Anna Hammond and our Willie and wrote to Mother. Anna writes that Horace is again laid up with the grippe but his symptoms are different from what they were last Spring and not so distressing. (T.S.R. 32. 2 P.M. 50. S.S. 45.)

Dec. 31. Monday. The last day of the month, of the year, and of the century. And it was the very coldest morning of the whole year here. Horace Mann is today forty years old. O how I long to see him once more! Sometimes he gives us a little encouragement to hope he shall visit us, but he is so busy in his profession that I fear he will not come to a time when he will think he can drop all his patients and go so far from them. I have written to Lizzie McLellan. The year now closing has been one of signal mercies to us, in that all the members of our large family have been spared to its close. And not only so but one little one - Eddi's Bernice - has been added to our number. We ought to feel profoundly grateful to the glorious Giver of all our mercies and the Sustainer of our lives. How I wish I could record that some of the dear ones, hitherto neglectful, have this year accepted the great Salvation, but I fear I cannot. Father, mercifully lead them to Thyself! We see the close of the Century but other eyes saw its beginning And just so, we who now see the beginning of the twentieth Century, will leave it to others to see its close! And where then shall we be? (T.S.R. 25. 2 P.M. 43. S.S. 39.)