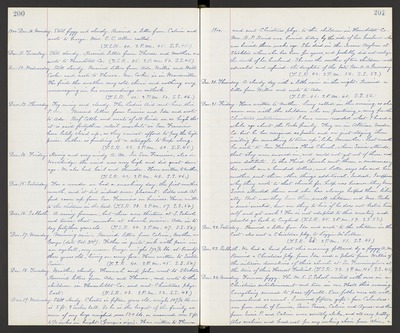 Dec. 12. Wednesday. Still cloudy. Received letters from Ada, Willie and Will Cooke and wrote to Theresa. Mr. Cooke is in Weaverville. He finds the weather very cold there and nothing very encouraging in his surroundings or outlook. (T.S.R. 40. 2 P.M. 50. S.S. 46.)

Dec. 13. Thursday. Fog rainy and cloudy. The Ladies Aid met here this P.M. Received letters from Eunice and Ida and wrote to Ada. Beef Cattle and meats of all kinds are so high that it is said fortythree retail markets in San Francisco have lately closed up, as they cannot afford to pay the high prices. Luther is finding it a struggle to keep along. (T.S.R. 43. 2 P.M. 48. S.S. 45.)

1900. and sent Christmas pkgs. to the children in Humboldt Co. Mrs. B.P. Baird was buried today by the side of her husband - who was buried three weeks ago. She died in the Insane Asylum at Stockton where she has been for years, and probably did not realize the death of her husband. She was the mother of ten children - well educated and refined - the daughter of the late Rev. A.A. Guernsey. (T.S.R. 42. 2 P.M. 56. S.S. 53.)

Dec. 21. Friday. Have written to Mother. Lucy called in the evening, as she came over with the children who are practising a song for the Christmas entertainment. I have never recorded what I heard a while ago about the Perks family. They are in Alturas, Modoc Co. but he has resigned as pastor and are just staying there "waiting for something to turn up", like Macanber. Last month he wrote to San Francisco Third Church, where Susie attends, that they were snowed in, and could not get out of there and were destitute. So the Third Church sent them a missionary box, worth over a hundred dollars, and Lilla says she and her mother sent them other things additional. Indeed, I suppose why they wrote to that church for help was because they know Susie attended there and she has always helped them liberally. But now they have three small children and Mrs. Perks a semi-invalid, how are they to live if he does not bestir himself and get work? He is not adapted to this country and should go back to England. (T.S.R. 45. 2 P.M. 59. S.S. 53.)

Dec. 23. Sabbath. We had a hard frost this morning followed by a foggy A.M. Received a Christmas pkg. from Ida and a photo from Willie of the interior decorations of their church at So. Framingham at the time of their Harvest Festival. (T.S.R. 33. 2 P.M. 48. S.S. 45.)

Dec. 24. Monday. Forenoon foggy. The M.E.S. School united with ours in a Christmas entertainment and tree in our Hall this evening. Everything seemed to pass off well. Our folks were all well remembered as usual. I received fifteen gifts - four Calendars - one from each of Eunice, Susie Pascoe, Calvin and Agnes - and these from Susie P. and Calvin were exactly alike, and all very pretty. Also cushion and head rest for any rocking chair from Alice, a