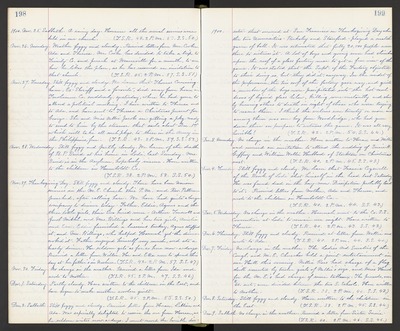 Nov. 26. Monday. Weather foggy and cloudy. Received letters from Mr. Cooke, Ada and Theresa. Mr. Cooke has decided to take a trip to Trinity Co. and preach at Weaverville for a month, to see how he likes the place, as he has received an invitation to that church. (T.S.R. 45. 2 P.M. 57. S.S. 51.)

Nov. 27. Tuesday. Still foggy and cloudy. We learn that Thomas Cunningham, Ex-Sheriff and a favorite, died away from home in Tuolumne Co. suddenly, yesterday, where he had gone to attend a political meeting. I have written to Theresa and to Ada, and have sent to Theresa a Christmas present for George. She and Miss Nellie Jacobs are getting a pkg. ready to send to him by the steamer that sails about Dec. 1st which will take all such pkgs. to those in the army in the Philippines, free. (T.S.R. 43. 2 P.M. 59. S.S. 53.)

Nov. 29. Thankgiving Day. Still foggy and cloudy. There have been Union services in the M.E. Church this P.M. and Rev. Patterson preached, after calling here. We have had quite a large company to dinner today - Father, Eddie, Agnes and the three little girls, their two hired men - Arthur Truscott and Jacob Mikhl, and Mrs. Billings and her two girls, Amelia and Eva. Eddie furnished a luscious turkey, Agnes stuffed it, and Mrs. Billings, who helped Hannah get the dinner cooked it. Father enjoyed himself very much, and ate a hearty dinner. He seldom gets as far as here now-a-days. Received a letter from Willie. He and Etta were to spend this day at her father's in Nashua. (T.S.R. 42. 2 P.M. 57. S.S. 47.)

Dec. 2. Sabbath. Still foggy and cloudy. Received letters from Horace, Lillian and Ada. Was especially delighted to receive the one from Horace, as he seldom writes now-a-days. I must record the horrible disaster

1900. that recurred at San Francisco on Thanksgiving Day when the two Universities - Berkeley and Stanford - played a match game of ball. It was estimated that fully 20,000 people were there to witness it. A lot of boys and young men had climbed upon the roof of a glass factory near to get a free view of the game. It was stated that the Supt. of the Factory objected to their doing so, but they did it, anyway. In the midst of the performance, the tin roof of the factory gave way, and quite a number of the boys were precipitated into the hot cauldrons of liquid glass below, killing some instantly and slowly burning others to death in sight of those who were trying to rescue them. I think the victims were twenty or more and among them was one boy from Woodbridge, who had gone down there on purpose to witness the game. It was all very horrible! (T.S.R. 42. 2 P.M. 50. S.S. 44.)

Dec. 3. Monday. No change in the weather. Have written to Horace and Willie and received an invitation to attend the wedding of Susie H. Geffroy and William Walter Hubbard of Stockton on Christmas next. (T.S.R. 40. 2 P.M. 45. S.S. 43.)

Dec. 4. Tuesday. Still foggy and cloudy. We learn that Francis Cogswell of the Bank of Lodi shot himself in the head last Saturday. He was found dead in the hay-mow. Dissipation probably lead to it. Received letters from Mother, Ada and Theresa, and wrote to the children in Humboldt Co. (T.S.R. 40. 2 P.M. 44. S.S. 43.)

Dec. 7. Friday. No change in the weather. The Ladies Aid Societies of the Congl. and M.E. Churches held a joint entertainment in our Hall this evening. Nettie Ross had charge of a flag drill executed by twelve girls of Nellie's size, and Miss [?] for the M.E.'s had charge of some tableaux. The proceeds, over $60. net, were divided between the two S. Schools. Have written to Mother. (T.S.R. 38. 2 P.M. 44. S.S. 43.)