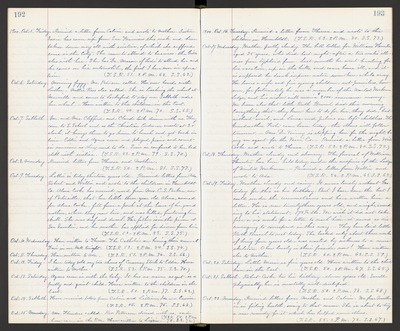 1900. Oct. 5. Friday. Received a letter from Calvin and wrote to Mother. Sister Susie has come up from San Francisco this week and been taken down very ill with sciatica, of which she suffered some in the City. She came to attend to business - the Gill also with her. She has Dr. Mason of Lodi to attend her and he comes on his automobile, the first I have seen in operation. (T.S.R. 51. 2 P.M. 68. S.S. 62.)

Oct. 6. Saturday. Morning foggy. Mr. Petersen called. He now boards with Luther. Nettie Ross also called. She is teaching the school at Macville and comes to Lockeford to stay over Sabbath - rides her wheel. - Have written to the children in the East. (T.S.R. 44. 2 P.M. 70. S.S. 65.)

Oct. 7. Sabbath. Mr. and Mrs. Clifford and Claude took dinner with us. They come to S. School and as the Christian Endeavor meets at 2 o'clock, it hurry's them to go home to lunch and get back in time. Eddie and Agnes came and played piano and cornet in unison as they used to do. Susie is confined to her bed still with sciatica. (T.S.R. 42. 2 P.M. 79. S.S. 70.)

Oct. 9. Tuesday. Lottie is today thirteen years old. Received letters from Ada, Robert and Willie, and wrote to the children in Humboldt Co. Alma Cooke has received word from Mrs. C.S. Parker, now of Porterville, that her little three year old Alma, named for Alma Cooke, fell from a porch at the home of her grandmother, where they now live, and was killed, fracturing her skull. She was deaf and dumb. Her father is in the prison at San Quentin, and her mother has applied for divorce from him. (T.S.R. 52. 2 P.M. 83. S.S. 75.)

Oct. 17. Wednesday. Weather partly cloudy. The bell tolled for William Hunter aged 35 years, who died last night after a two week's illness from typhoid fever. Last month he went hunting for his vacation, up in the hills, and came home ill, and it is supposed he drank impure water somewhere while away. He leaves a wife and five young children, not penniless, however, for fortunately he was a member of the Waited Workman Lodge, and his widow will received $2000. insurance money. We learn also that little Ruth Bruml died this morning. Everything that they knew how to do for her, they did, but without avail, and Laura and Julius are left childless. The Grandmother Foote came home today - the others will follow tomorrow. - Mrs. De Vinney is stopping here for the night, being an agent for The Viavi Co. - Received a letter from Will Cooke and wrote to Theresa. (T.S.R. 52. 2 P.M. 80. S.S. 73.)

Oct. 19. Friday. Weather cloudy and rainy. It seems lonely without Geo. today for this is his birthday. But I have done the best I could under the circumstances and have written him a letter. He is now twentythree years old, and weighs, according to his statement, 172 1/2 lbs. We wish it did not take five or six weeks for a letter to reach him - it seems so discouraging to correspond in this way. - They have laid little Ruth Bruml to rest today. She lacked only about three weeks of being four years old - was wasted by sickness to a mere skeleton. O how lonely is their fireside now! Have written also to Mother. (T.S.R. 60. 2 P.M. 62. S.S. 59.)