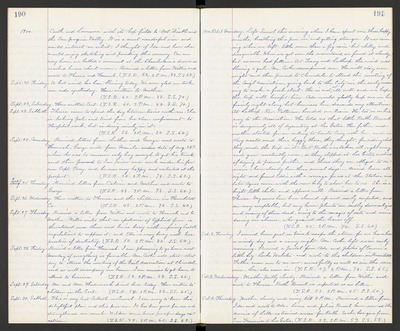 1900. Castle and Livermore with its hop - fields to Mt. Diablo and the San Joaquin Valley. It is a most wonderful view and would interest an artist. I thought of Ida and how she would enjoy sketching and painting this scenery. On our way home we halted a moment at the Chamberlain's door and reached home about noon. Received a letter5 from Willie and wrote to Theresa and Hannah. (T.S.R. 52. 2 P.M. 82. S.S. 68.)

Sept. 24. Monday. Received letters from Luther and George and wrote to Hannah. George wrote from Manila under date of Aug. 23rd where he was to remain only long enough to get his trunk and then proceed to San Isidro and work under his former Capt. Perry, and he was very happy and contented at the prospect. (T.S.R. 50. 2 P.M. 78. S.S. 62.)

Sept. 27. Thursday. Received a letter from Willie and wrote to Hannah and to Mother. Willie writes that an epidemic of typhoid fever is threatened near there and he is busy with enforcing health regulations to suppress it, and Etta is very busy with her practice of dentistry. (T.S.R. 50. 2 P.M. 80. S.S. 64.)

Sept. 28. Friday. Received a letter from Hannah. I am planning to go home next Monday if everything is favorable. Mr. Cooke will start that day to attend the meeting of the Gen'l Association at Cloverdale, and so will accompany me home. I am anxious to get home to attend to business. (T.S.R. 52. 2 P.M. 84. S.S. 66.)

1900. Oct. 1. Monday. Left Sunol this morning where I have spent over three happy months, breathing this pure air and getting stronger. It was raining when we left - little more than a fog rain - but chilly and disagreeable. When we got over the mountains, we found it cloudy but no rain had fallen. At Tracy and Lathrop the wind was blowing a gale. Mr. Cooke accompanied me. He will stay over night and then proceed to Cloverdale to attend the meeting of the Cong'l Association, going back to the City in the early morning to make a fresh start. He is not at all well and we hope the trip will benefit him. Ada would gladly keep me in her family night along, but business here demands my attention. At Lathrop, Rev. Patterson boarded our train. He too is on his way to the Association. He told us that little Ruth Brunel is dangerously ill of dysentery at Los Gatos. Her father and mother started for an outing to Santa Cruz with her, and as they would need their buggy there, they thought, for riding about they made the trip in it. But Ruth was taken ill right away and grew constantly worse, so they stopped at Los Gatos, instead of trying to proceed father, and there they are obliged to remain - have already been there several days. - Arrived home all right and formed Eddie with a carriage for us at the Station and later Agnes came with the new baby to show her to us. She is a bright little child and appears well. Received a letter from Theresa. My rooms have been cleaned up and newly carpeted, and are very acceptable, but my house plants are sadly demoralized and many of them dead, owing to the ravages of rats and mice during our absence, who growed the leaves off. (T.S.R. 45. 2 P.M. 74. S.S. 60.)

Oct. 2. Tuesday. I arrived home just in time to escape the storm, for we have had a windy day and a rainy night. Mr. Cooke left us in early morning. Received a postal from Ada and photos of Eunice's little boy - Locke Webster - and wrote to the children in Humboldt. Father came over to see me - seems fully as well as in the summer. Lou also came in. (T.S.R. 47. 2 P.M. 74. S.S. 65.)

Oct. 4. Thursday. Weather cloudy and rainy till 4 P.M. Received a letter from Ida and wrote to Ada. Laura and Julius Bruml have secured the services of Lilla as trained nurse for Ruth. So she has gone from San Francisco to Los Gatos. (T.S.R. 53. 2 P.M. 57. S.S. 55.)