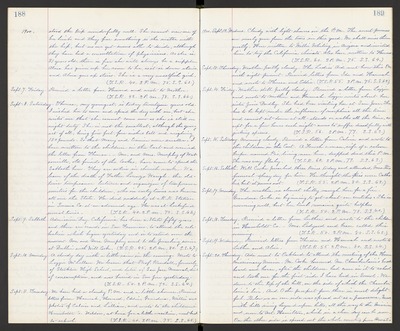 1900. stood the trip wonderfully well. She cannot use one of her limbs and they fear something is the matter with the hip, but no one yet seems able to decide, although they have had a consultation of physicians. As she is 81 years old, there is fear she will always be a cripple. Alma has given up her room to her, as it is down stairs. and Alma goes up stairs. She is a very unselfish girl. (T.S.R. 40. 2 P.M. 75. S.S. 62.)

Sept. 8. Saturday. Theresa, my youngest, is today twentyone years old. I wished her to come and spend the day with me, but she writes me that she cannot come now as she is still on night duty. She is not the smallest, although the youngest of all, being five feet, four inches tall and weighing 130 pounds. So that Mary and Eunice were smaller. I have written to the children in the East and received the letter from Theresa. - Mr. and Mrs. Murphy of Watsonville, old friends of the Cookes, have come to spend the Sabbath here. They are active in church work. We learn of the death of Father Lorenzo Waugh - the oldtime temperance lecturer and organizer of temperance societies for the children, who in early times was known all over the State. He died suddenly at a R.R. Station in Sonoma Co. at an advanced age. He was at Lockeford several times. (T.S.R. 40. 2 P.M. 75. S.S. 63.)

Sept. 9. Sabbath. Admission Day. California has been a State fifty years and there are crowds in San Francisco, to attend the celebration which began yesterday and is to extend over the morrow. Mr. and Mrs. Murphy went to the preaching service at Dublin with Will Cooke. (T.S.R. 45. 2 P.M. 80. S.S. 67.)

Sept. 10. Monday. A cloudy day with a little rain in the evening. Wrote to Lizzie McLellan. We learn that Prof. Randall, formerly of Stockton High School, and later of San Jose Normal, died of consumption, and was buried in San Jose yesterday. (T.S.R. 50. 2 P.M. 72. S.S. 64.)

Sept. 11. Tuesday. We have had a cloudy P.M. and a little shower. Received letters from Hannah, Howard, Eddie, Grandma, Willie and photos of Calvin and Lillian, and wrote to the children in Humboldt Co. Weldon, at home for a little vacation, went back to school. (T.S.R. 60. 2 P.M. 75. S.S. 65.)

1900. Sept. 12. Wednes. Cloudy with light showers in the P.M. The sweet prunes are nearly gone from the trees in this yard. We shall miss them greatly. Have written to Willie Whiting in Arizona and invited him to try the California climate. Also have written to Howard. (T.S.R. 60. 2 P.M. 75. S.S. 64.)

Sept. 14. Friday. Weather still partly cloudy. Received a letter from Lizzie and wrote to Mother and Hannah. Lizzie writes about her sister Josie Dudley. She had been visiting her at San Jose. She has to be kept under the influence of morphine all the time and cannot sit down at all stands or walks all the time, except for a few hours each night - seems to suffer dreadfully with jerking spasms. (T.S.R. 56. 2 P.M. 77. S.S. 63.)

Sept. 17. Monday. The weather is almost chilly enough here for a fire. Grandma Cooke is beginning to get about on crutches. She is recovering well, but here limb remains quite helpless (T.S.R. 50. 2 P.M. 78. S.S. 60.)

Sept. 20. Thursday. Ada went to Oakland to attend the meeting of the Home Missionary Union. Mr. Cooke borrowed Mr. Chamberlain's buck board and horse, after the children had come in it to school and took me for the first ride I have had in Sunol. We drove to the top of the hill, on the side of which the Chamberlain's live. And O the prospect from there is most delightful. Below us on one side was spread out as a panorama, [?] with hills rising beyond upon hills, all the way to the Mission and even to Mt. Hamilton, which in a clear day can be seen. On the other side is spread out the whole country from Hearst's