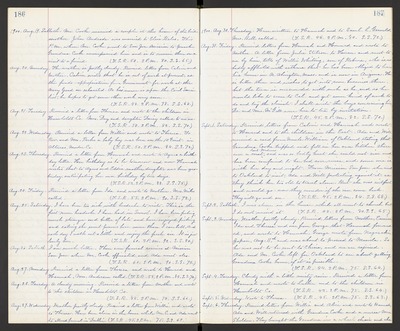 Aug. 20. Monday. The weather is partly cloudy. Received letters from Calvin and Mother. Calvin writes that he is out of work at present, as the funds - appropriation from Government - for work at the Navy Yard are exhausted. As his name is upon the Civil Service list, - he hopes to get some other work very soon. (T.S.R. 48. 2 P.M. 78. S.S. 68.)

Aug. 23. Thursday. Received a letter from Hannah and wrote to Agnes a birthday letter. Her birthday is to be tomorrow and now Hannah writes that to Agnes and Eddie another daughter was born yesterday, anticipating her own birthday by two days. (T.S.R. 52. 2 P.M. 88. S.S. 75.)

Aug. 25. Saturday. I have been too sick with headache to write. This is the first severe headache I have had in Sunol. I have been feeling much stronger and better of late and have enjoyed picking and eating the sweet prunes here more than I can tell. And each day I walk out a little and enjoy the fresh air. It is just lovely here. (T.S.R. 60. 2 P.M. 92. S.S. 80.)

Aug. 31. Friday. Received letters from Hannah and Howard and wrote to Mother. A letter from Julia Stetson to Horace and sent to us by him, tells of Willie Whiting, son of Rebecca, who is so badly afflicted with asthma that he has been obliged to leave his home in N. Abington, Mass. and is now in Arizona. He is better there and wishes to get into some business there, but the town is overcrowded with such as he, and so he would like to come to Cal. and get some kind of work to do and try the climate. I shall write the boys concerning him. Dr. and Mrs. McGill were here to tea by invitation. (T.S.R. 45. 2 P.M. 82. S.S. 70.)

Sept. 1. Saturday. Received letters from Calvin and Hannah and wrote to Howard and to the children in the East. - Ada and Will received a card from Uncle William of Oakland stating that Grandma Cooke tripped and fell in her own kitchen there over a mat, last Wednes. and was so badly hurt she could not rise and has been confined to her bed ever since, and some one is with her day and night. From Mission San Jose she went to Oakland to visit, Ada and Will protesting against it, as they think her too old to travel alone. But she was wilful and would go - now they wonder if she can come back. They will go and see. (T.S.R. 45. 2 P.M. 84. S.S. 68.)

Sept. 3. Monday. Weather partly cloudy. Received letters from Mother, Eunice Ida and Theresa and one from George that Hannah forwarded, and wrote to Hannah. George wrote from Nagasaki, Japan, Aug. 11th, and was about to proceed to Manila. So he was not to be sent to China, and we are rejoiced. Ada and Mr. Cooke left for Oakland to see about getting Grandma Cooke home, if it is possible. (T.S.R. 44. 2 P.M. 75. S.S. 64.)

Sept. 6. Thursday. Received letters from Willie and Alice and wrote to Hannah. Ada and Will returned with Grandma Cooke and a nurse Mrs. Sheldon. They brought the Grandma in a wheel chair and she