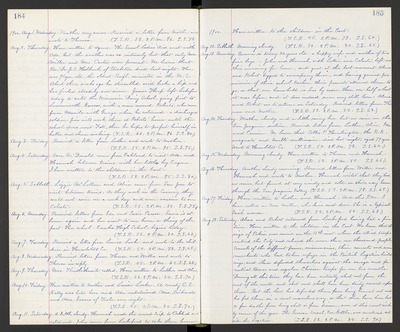 Aug. 2. Thursday. Have written to Agnes. The Sunol Ladies' Aid met with Ada but the weather was so intensely hot that only Mrs. Miller and Mrs. Carter were present. We learn that Rev. Dr. J. C. Holbrook of Stockton died last night. He was 91 yrs. old, the oldest Cong'l. minister in the U.S. About three weeks ago he stumbled and broke a hip and has failed steadily ever since. James Thorp left Lockeford today to enter the Wiscousin Dairy School, going first to Leavenworth, Kansas, with a man named Roberts, who came from Manila with George when he returned - a discharged soldier. Jim will work there at Roberts' home until the school opens next Fall, then he hopes to perfect himself in butter and cheese making. (T.S.R. 60. 2 P.M. 96. S.S. 80.)

Aug. 11. Saturday. A little cloudy. Hannah made the round trip to Oakland and returned. John came from Lockeford to take them home.

Aug. 13. Monday. Eunice is today 26 years old - a happy wife and mother of two fine boys. - John and Hannah, with Lottie and Celeste, left us this morning for home, and just at the last moment, Alma and Robert begged to accompany them, and having gained permission of their school-teacher, their parents allowed them to go, so that our household is less by more than one-half what it was before, and it does indeed seem very still here. Alma and Robert are to return on Saturday. Received letters from Theresa and Mother. (T.S.R. 52. 2 P.M. 82. S.S. 68.)

Aug. 16. Thursday. Another cloudy morning. Received letters from Willie and Hannah and wrote to Mother. Hannah writes that they had no rain, but found it very windy and cold on their way home through the San Joaquin Valley. (T.S.R. 52. 2 P.M. 78. S.S. 65.)

Aug. 18. Saturday. Alma and Robert returned from Lockeford having had a fine time. Have written to the children in the East. We learn that the siege of Pekin was raised on the 15th inst. when the allied troops entered the City and relieved the more than one thousand people Consuls of the different powers, missionaries, their converts and some merchants who had taken refuge in the British Legation build rings, and there defended themselves against the savage and fanatical Boxers and regular Chinese troops for over two months. During all this time they have been virtually sheet out from the rest of the world, and shot and shell have been daily rained upon them. But the Lord has defended them from being burned out and has fed them in a most marvelous way, so that there have been but a few deaths from being shot or from disease, even at this most sickly season of the year. The German Consul, Von Kettler, was murdered outside the Legation. (T.S.R. 52. 2 P.M. 84. S.S. 70.)