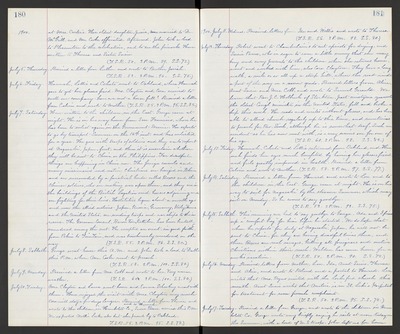 July 6. Friday. Hannah, Lottie and Celeste went to Oakland, where Hannah goes to get her glasses fixed. Mrs. Clayton and Cora arrived to swell our company - have we not a house full? Received a letter from Calvin and wrote to Mother. (T.S.R. 55. 2 P.M. 95. S.S. 82.)

July 7. Saturday. Have written to the children in the East. George came at night. He is on his way home from San Francisco, where he has been to enlist again in the Government Service. He expects to go by transport Summer on the 16th inst. and has enlisted for a year. He goes with troops of soldiers and they are to report at Nagasaki, Japan. first, and then it is uncertain whether they will be sent to China or the Philippines. For dreadful things are happening in China now. The foreign consuls and many missionaries and native Christians are beseiged in Pekin and are surrounded by a fanatical horde called Boxers and the Chinese soldiers, who are making war upon them, and they are in the buildings of the British Legation and houses adjoining and are fighting for their lives. Hostilities began about a month ago and now the allied nations - Japan, Russia, Germany, Italy, France and the United States, are sending troops and warships to their rescue. The German Consul, Baron Vonketteler, has been brutally murdered among the rest. He accepted an escort in good faith, from Pekin to Trin Tsin, and was treacherously murdered on the way. (T.S.R. 55. 2 P.M. 96. S.S. 80.)

July 10. Tuesday. Mrs. Clayton and Laura went home and Emma Schackey went with them. Have enjoyed the visit with Mrs. Clayton very much. Cora will stay a few days longer. Received a letter from Theresa and wrote to the children in Humboldt Co. and to Hannah. Susie Pascoe arrived this P.M. We expected Nellie Locke also but she passed by to Oakland. (T.S.R. 55. 2 P.M. 95. S.S. 78.)

July 12. Thursday. Robert went to Chamberlain's to cut apricots for drying, and Susie Pascoe, who is eager to earn a little money that she may buy and carry presents to the children when she returns home, went and worked with him, also Cora Clayton. They have a long walk, a mile or so all up a steep hill, where the road winds a part of the way on a narrow grade. Received letters from Alice, Aunt Susie and Mrs. Cobb, and wrote to Samuel Gerould. We learn that Rev J. C. Holbrook of Stockton, past ninetyone years old the oldest Cong'l minister in the United States, fell and broke a hip this week. He reads and writes without glasses, and has been able to attend church regularly up to this time, and sometimes to preach for Rev. Sink, although he is somewhat deaf. Such an accident as he has now met with, is a very serious one for one of his age. (T.S.R. 60. 2 P.M. 98. S.S. 82.)

July 13. Friday. Hannah, Celeste and Lottie returned from Oakland, and Hannah finds her eyes much benefited by having her glasses fixed and feels greatly improved in health. Received a letter from Calvin and wrote to mother. (T.S.R. 58. 2 P.M. 97. S.S. 77.)

July 15. Sabbath. This morning we had to say goodbye to George. Ada and I fixed up a "comfort bag" for him before he started. We do hope that when he reports for duty at Nagasaki, Japan, he will not be sent to China, for they are having dreadful times there, and those Boxers are real savages, killing all foreigners and native Christians within their reach. Weldon has come home for a week's vacation. (T.S.R. 50. 2 P.M. 90. S.S. 72.)

July 16. Monday. Received letters from Mother, Lou, Ida, Aunt Susie, Theresa and Alice, and wrote to Roland and a postal to Howard. Lou writes that Mrs. Ryno united with the Lockeford church this month. Aunt Susie writes that Mertice is in St. Luke's Hospital for treatment for some female complaints. (T.S.R. 50. 2 P.M. 95. S.S. 74.)

July 17. Tuesday. Received a letter from George, and wrote to the children in Humboldt Co. George wrote very briefly saying he sails at noon today on the Sumner, with a load of U. S. troops. John left us for house