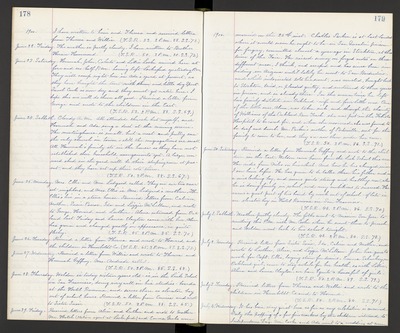 June 23. Saturday. Hannah, John, Celeste and Lottie Locke arrived here at four and one-half P.M. having left Lockeford yesterday P.M. They will camp right here in Ada's yard at present, as they have brought the tent with them and little dog Sport Sunol Creek is now dry and they must get water here. I hope this air will do them all good. Received a letter from George and wrote to the children in the East. (T.S.R. 52. 2 P.M. 88. S.S. 69.)

June 24. Sabbath. Cloudy A.M. All attended church but myself, and Hannah and Ada sang a duet at the evening service. The meetinghouse is small, but a neat and pretty one - the only church in town - still the congregations are small. All Hannah's family ate in the house as they have not established their household arrangements yet. A large, unused shed in the yard will be their sleeping room at present, and they have set up their cots there. (T.S.R. 50. 2 P.M. 88. S.S. 67.)

June 25. Monday. Mrs. Ellis and Mrs. Ledyard called. They are our two nearest neighbors, and Mrs. Ellis is Mrs. Ledyard's mother, - The Ellis's live in a stone house. Received letters from Calvin, Mother, Susie Pascoe, Ida and Lizzie McLellan, and wrote to George, Howard and Luther. Alma returned from Oakland last Friday and Laura Clayton came with her. Alma has grown and changed greatly in appearance, is quite fleshy. (T.S.R. 45. 2 P.M. 85. S.S. 70.)

June 28. Thursday. Weldon is today sixteen years old - is in the Lick School in San Francisco, doing very well in his studies - boards at the Hotel Ramona, and serves there as elevator boy out of school hours. Received a letter from Eunice and wrote to Sister Susie. (T.S.R. 50. 2 P.M. 88. S.S. 65.)

June 29. Friday. Received letters from Alice and Luther and wrote to Mother. Mr. Hatch (station agent at Lockeford) and Emma Grubs were

1900. married on the 25th inst. Charles Parker is at last landed where it would seem he ought to be in San Quentin prison for forgery, committed almost a year ago in Stockton, at the time of the Fair. He raised money on forged notes on three different men, I think, and escaped and has since been in hiding in Arizona until lately he went to San Berdradino, and while intoxicated told his secret, was arrested, brought back to Stockton, tried, or pleaded guilty, and sentenced to three years in prison, and is already there. In the meantime he left his family destitute in Oakland - wife and four little ones. One of the little ones, Alma, was taken sick, and through the charity of Williams of the Oakland Race Track. she was put in the Fabiola Hospital to be cared for, and when she recovered, she was found to be deaf and dumb. Mr. Parker's mother of Porterville, sent for the family to come to her, and they are now there under her care. (T.S.R. 50. 2 P.M. 86. S.S. 71.)

June 30. Saturday. Received a letter from Hannah Geffroy and wrote to the children in the East. Weldon came home from the Lick School this eve. He rides from Niles on his wheel. And how he has changed since I saw him before. He has grown to be taller than his father and is a nice looking boy, and seems quite strong and healthy now, also he is doing finely in school, and very ambitious to succeed. He earns a great part of his board by work out of school - of late is an elevator boy in Hotel Ramona in San Francisco. (T.S.R. 48. 2 P.M. 86. S.S. 70.)

July 2. Monday. Received letters from Sister Susie, Ida, Calvin and Mother, and wrote to Luther, Alice, and Lizzie McLellan. John has gone to work for Capt. Ellis, laying stone for drains. Emma Schackey, an Oakland girl, came to stay awhile for her health, so with Lottie, Alma and Laura Clayton, we have quite a houseful of girls. (T.S.R. 50. 2 P.M. 89. S.S. 79.)

July 4. Wednesday. It has been very quiet here as far as any celebration is concerned. Duly the popping of a few fire crackers by the children witnessed to Independence Day. Mr. Cooke and Ada went to a wedding at noon