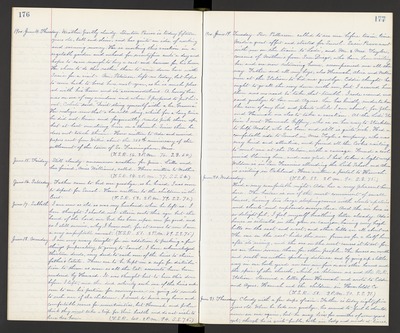 1900. June 14. Thursday. Weather partly cloudy. Benton Pascoe is today fifteen years old, tall and slim, and has quite an idea of working and earning money. He is working this vacation in a vegetable garden and orchard for seventyfive cents a day and hopes to earn enough to buy a cart and harness for his horse. He chose to do this rather than to come down here with Susie for a visit. Mr. Petersen left us today, but hopes to come back to board here next year, as he is much pleased with his room and its accommodations. A honey-bee was on one of my windows and when I proposed to put him out, Celeste said, "Don't sting yourself with a bee, Gramma." He realizes now that a bee will sting, which for a long time he did not know and frequently would pick them up, but at last one sting him on a thumb. Since then he does not touch them. Have written to Ada and received papers sent from Willie about the 250th anniversary of the settlement of the town of So. Framingham, Mass. (T.S.R. 56. 2 P.M. 76. S.S. 64.)

June 18. Monday. I am very weary tonight for in addition to packing a few things preparatory to going to Sunol, I have acknowledged thirteen deeds, my deed to each one of the heirs to their father's Estate. These are to be kept in a safe for distribution to them as soon as all the Est. accounts have been rendered by Howard. It was thought best to have this done before I left, and the deed whereby each one of the heirs makes over to me his portion for recovery once is going its rounds to each one of the children. I dread to leave my home and comfortable rooms for uncertainties, but Hannah and John think they must take a trip for their health and do not wish to leave me here. (T.S.R. 60. 2 P.M. 94. S.S. 75.)

1900. June 19. Tuesday. Rev. Patterson called to see me before train time. Made a great effort and started for Sunol. Susie Pascoe went with me on the train to Lodi, and Mr. & Mrs. Taylor, cousins of Mother's from San Diego, who have been visiting her and are now returning home, accompanied me all the way. Father and all my boys, also Hannah, Alice and Nellie were at the Station to bid me goodbye. Eddie thought he ought to go all the way down with me, but I assured him there was no need to take that trouble. I rode around and said goodbye to Lou and Agnes. Lou has kindly undertaken the care of my bird and plants while I am absent, for John and Hannah are also to take a vacation. At the Lodi Station I met Hannah Geffroy, who is on her way to Stockton to help Mabel, who has been and still is quite sick. Had a comfortable ride to Sunol in Mrs. Taylor's company, who was very kind and attentive, and found all the Cookes waiting to meet me at the Station, with a carriage. Found a cool wind blowing here, and was glad I had taken a light wrap. Weldon is in San Francisco attending the Lick School and Alma is visiting in Oakland. Have written a postal to Hannah. (T.S.R. 58. 2 P.M. 90 S.S. 75.)

June 20. Wednesday. Had a very comfortable night. Ada has a very pleasant home here. The house is one of the most convenient of small houses, having two large sleeping rooms with closets up stairs and closets and cupboards everywhere. And the air here is so delightful, I feel myself breathing better already. Ada's house is situated in the glen or canyon, having very high hills on the east and west, and other hills are all about us. The one on the east hides the sun from us for a half-hour after its rising, and the one on the west causes it to set for us an hour sooner than for other people. The houses on north and south are within speaking distance and by going up a little way in our back yard we can see five or six other houses and the spire of the church, which is between us and the R.R. Station. Received a letter from Hannah and wrote to Eddie and Agnes, Hannah and the children in Humboldt Co. (T.S.R. 58. 2 P.M. 90 S.S. 71.)

June 21. Thursday. Cloudy with a few drops of rain. Father is today eightyfive years old. When he bade me goodbye, he seemed to feel he should never see one again, but he may live for months of even years yet, though he is quite feeble, both in body and mind at times.