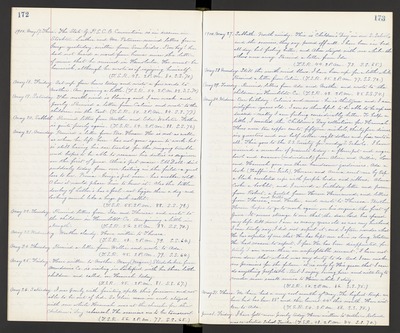 1900. May 17. Thurs. The State Y.P.S.C.E. Convention is in session in Stockton. Luther and Mr. Peterson received letters from George yesterday, written from San Isidro. Poor boy! he had not heard a word from home since the letter of mine that he received in Honolulu. He must be homesick, although he wrote as if enjoying himself. (T.S.R. 49. 2 P.M. 80. S.S. 70.)

May 21. Monday. Received a letter from Bro. Horace. He is not as well as when he left here - has not gone again to work - but is still having his ear treated for the ringing trouble and hopes to be able to resume his duties as engineer on the first of June. Alice's pet mare - Ell Dell - died suddenly today from over-heating in the field - a great loss to her. Prima - George's pet mare - has another colt. O how it would please him to know it. Also the little donkey of Luther's has a foal - not bigger than a dog - and looking much like a huge jack - rabbit. (T.S.R. 55. 2 P.M. 88. S.S. 78.)

May 26. Saturday. I was fonly with fainting spells this forenoon and not able to be out of bed. So Alice came in and stayed with me while Hannah was at the church for the Children's Day rehearsal. The exercises are to be tomorrow. (T.S.R. 56. 2 P.M. 77. S.S. 65.)

May 30. Wednes. Our birthday - Calvin's and mine - he is thirtyone and I am sixtyfour years old. I am so thankful to be able to be up and dressed - really I am feeling considerably better. To help a little, I counted the "Children's Day" collection for Hannah. There were ten copper cents, fiftyone nickels, thirtyfour dimes, six quarters and one-half dollar - eight-dollars and five cents in all. This goes to the S.S. Society for needy S. Schools. I have received a number of presents today - a flower pot and sugar bowl and creamer (individual) from Alice and Nellie, Lou and Hannah gave me three handsome jardiniers, Ada a book (Traffic in Girls), Horace and Anna sent me by Exp. a black crocheted cape with purple border and ribbons. Alma Cooke a booklet, and I received a birthday letter and poem from Robert, a postal from Horace Hammond, and letters from Theresa and Willie and Hester, and wrote to Theresa. Brother Horace hopes to go to work again on his engine the first of June. It seems strange to me that the dear Lord has spared my life till now I am as many years old as was my husband. I can truly say, I did not expect it, and I often wonder what He has expected of me that He has kept me alive so long. Whatever He had reason to expect, I fear He has been disappointed, for truly I am worse than "an unprofitable servant," I have not even done that which was my duty to do. And I can make no promises for the future - it is only by His grace that I can do anything profitable. But I enjoy living here and will try to render some small service to Him while I stay. (T.S.R. 50. 2 P.M. 86. S.S. 75.)