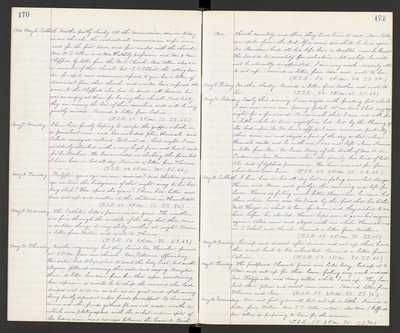 1900. May 6. Sabbath. Weather partly cloudy. At the communion service today in our church, the "individual communion cups" were used for the first time, and four united with the church - Mrs. W.S. Allen and Mrs. Hatch by profession and Mr. & Mrs. Clifford by letter from the M. E. Church. Mrs. Allen also was a member of that church, but S.O. Elliott, the acting pastor, for spite and meanness, refused to give her a letter of dismissal from that church, and would have refused the same to the Cliffords also, had he dared - all because he was so angry at them for leaving their church. And truly they are among the best of their members, and will be very greatly missed. Received a letter from Calvin. (T.S.R. 52. 2 P.M. 73. S.S. 65.)

May 7. Monday. I have been fondly hoping to escape the grippe which is so prevalent now, and has included John, Hannah and Celeste among its victims. But not so. Last night I was suddenly attacked with a very high fever and had to send for Dr. Barbour. He has succeeded in checking the fever but I have been in bed all day. Received a letter from Theresa. (T.S.R. 52. 2 P.M. 75. S.S. 66.)

May 8. Tuesday. Fortyfive years ago we were married! And thirteen years ago we laid the bridegroom of that night away to his last long sleep! How speed the years! I have been better and have sat up and written to the children in Humboldt. (T.S.R. 50. 2 P.M. 76. S.S. 72.)

May 9. Wednesday. The Catholics held a picnic in our grove. The weather was fine through the middle of the day but there came a sudden change to very chilly weather at night. Received a letter from Willie and wrote to Theresa. (T.S.R. 54. 2 P.M. 81. S.S. 63.)

May 10. Thursday. Weather very rainy, but they buried Mr. Henshaw - funeral at 2 P.M. from our church - Rev. Patterson officiating. His sister had telegraphed to send the body East, but another telegram followed reversing this order and saying "Bury him there." A letter has come from her that upon ascertaining how expensive it would be to ship the remains, she had decided not to do so, as she is in great need of the money being partly dependent upon friends for support. So Lou and Anna and other friends gathered flowers and made wreaths, x.c. which were photographed with the casket, and in spite of the heavy rain, nine carriages followed the hearse to Brick

1900.church cemetery, and there they laid him to rest. Rev. Patterson spoke from the text, "If a man die shall he live again"? Mr. Henshaw had all his life been a doubter now he knows. He trusted to morality for salvation - let us hope he will not be eternally disapponted. I am very weak - scarcely able to sit up. Received a letter from Ada and wrote to her. (T.S.R. 56. 2 P.M. 60. S.S. 54.)

May 12. Saturday. Early this morning I was seized with fainting fits which I am sure came near proving fatal. At one time I lost my eye sight for a few seconds. Am so weak that I was not able for a little while to turn myself in bed, but by the blessing of the Lord upon Dr. Barbour's efforts, I soon recovered partially. Alice came in and stayed a part of the day, so that when Hannah could not be with me, I was not left alone. Received a letter from Ida. We learn today of the death of Mrs. A.A. Cudner in San Francisco, where the family has lived of late. She died of typhoid pneumonia. Her home was not far from where Aunt Susie lives. (T.S.R. 52. 2 P.M. 75. S.S. 65.)

May 13. Sabbath. I have been in bed all day but our feeling somewhat stronger. Horace and Anna said goodbye this morning and left for home. Horace is feeling much better than when he came but their return home was hastened by the fact that her brother Will Haye's is about to leave for Nome, and they wished to see him before he started. Horace hopes soon to go on his engine again. Alice came and stayed with me while Hannah was in S. School and church. Received a letter from Mother. (T.S.R. 47. 2 P.M. 75. S.S. 65.)

May 15. Tuesday. The postponed Clements picnic was held today. Got up at 2 P.M. and sat up for three hours, feeling very weak indeed. Mrs. Fitzgerald and Mary called while I was up. They have lost their place and must soon move. Received letters from Theresa and Ida. (T.S.R. 52. 2 P.M. 83. S.S. 72.)