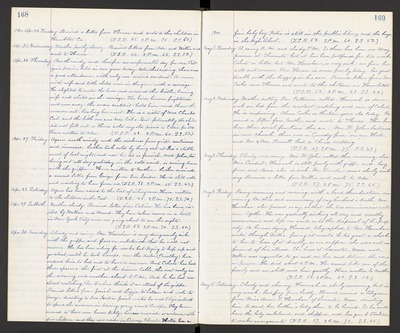 Apr. 26. Thursday. North windy, and therefore an unfavorable day for our Citizen’s picnic, held in our grove today. Notwithstanding, there was a good attendance, with only one serious accident. A man with wife and little child were in the grove with a carriage. He alighted to water the horse and removed the bridle, leaving wife and child in the carriage. The horse become frightened and ran away - the man couldn’t hold him - and threw the woman out, breaking her wrist. She is a sister of Mrs. Charles Coil, and the little one was Mrs. Coil’s. But fortunately the child did not fall out . - Have sold my old piano to Eddie for $100. Have written to Ada. (T.S.R. 43. 2 P.M. 60. S.S. 53.)

Apr. 27. Friday. Again north windy and the sickness from grippe continues and increases. Luther took cold by being out at Geo.’s stable most of last night, and now he too is feverish. And John, too, being out all day yesterday in the cold wind, is coming down with the grippe. - Have written to Mother. Luther received a second letter from George from San Isidro. He is still well and waiting to hear from us. (T.S.R. 38. 2 P.M. 65. S.S. 63.)

Apr. 30. Monday. Cloudy and rainy. Mr. Henshaw is very dangerously sick with the grippe, and fears an entertained that he will not recover. He has been ailing for weeks but trying to keep up and go about, until he took hiccups. Now the doctor (Priestley) has ordered him to bed and to have nurse. And Celeste has had three spasms - the first at the dinner table, the next early in the evening and another about 11 P.M. And he has had constant watching. Dr. Barbour thinks it an attack of the grippe. Received letters from Josiah and Lizzie McLellan and wrote to George, directing to San Isidro. Josiah writes he and Eliza intend to spend the summer in touring, going events Europe. They have moved to their own house lately. Louise married a widower with five children and they now riside in Ouray, Colorado. Hattie has a

May 1. Tuesday. A rainy A.M. and cloudy P.M. So there has been no May picnic at Clements, but it has been postponed for two weeks. Celeste is better but Mr. Henshaw, is very sick - we fear he will not recover. Bro Horace is more poorly today - has great trouble with the buzzing in his ears. Received letters from Mr. Cooke and Theresa and wrote to the children in Humboldt. (T.S.R. 52. 2 P.M. 63. S.S. 60.)

May 2. Wednesday. Weather sultry. Rev. Patterson called. Hannah is down sick in bed from the constant watching and care of Celeste. He is improving. Alma Cooke is thirteen years old today. Received a letter from Mother and wrote to Theresa. Then have been three "social functions" this eve - Mrs. St. John lectured in our church, three was a "Comedy farce" in our Hall, and Mr. & Mrs. Russell had a "China wedding." (T.S.R. 47. 2 P.M. 77. S.S. 69.)

May 4. Friday. Rainy morning and evening, with a hard thunderstorm in evening. On this sad anniversary of my husband's death, Mr. Henshaw also passed away, so that the two anniversaries will come together. He was gradually sinking all day and mostly unconscious, and left no word as to the disposal of his property. As he was dying, Howard telegraphed to Mr. Henshaw sister, through Willie, fearing it would be too great a shock to her to hear of it directly, as we suppose she was not in formed of his illness. She lives at Leicester, Mass. and Willie was requested to go and see her and deliver the news in person. He died about 4 P.M. He seemed like one of the family and we shall miss him greatly. Have written to Mother. (T.S.R. 58. 2 P.M. 60. S.S. 58.)

May 5. Saturday. Cloudy and showery. Hannah is slowly recovering, but is very weak - has hay fever badly. Howard received a telegram from Miss Annie P. Henshaw of Leicester, Mass. directing him to send her brother's body there to be buried. So he will have the body embalmed and shipped, and has gone to Stockton to make arrangements. (T.S.R. 57. 2 P.M. 72. S.S. 65.)