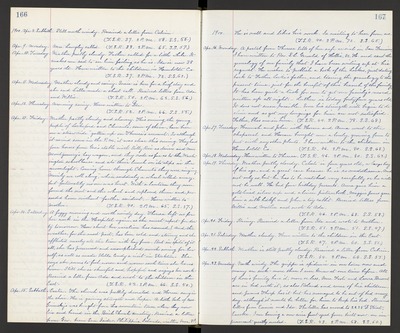 Apr. 13. Friday. Weather partly cloudy and showery. This evening, the young people of Lockeford and Clements, some of them, have been on a “straw ride” gotten up on Theresa’s account. So although it rained some in the P.M. it was clear this evening. They had four horses from Geo.’s stable with Billy Rise as driver and Mr. Montgomery’s hay wagon, and they rode as far as to the Washington school house and ate their lunch on its steps in the moonlight. Coming home through Clements they were singing "Merrily we roll along”, when suddenly a wheel rolled away, but fortunately no one was hurt. With a lantern they soon found the nut and the wheel and uplaced them and proceeded home without farther accident. - Have written to Mother. (T.S.R. 40. 2 P.M. 65. S.S. 57.)

Apr. 14. Saturday. A foggy morning and north windy day. Theresa left us for her work in the Hospital again, as she must report for duty tomorrow. How short her vocation has seemed! And the weather, for the most part, has been cold and stormy and she afflicted nearly all the time with hay fever. But in spite of it all, she has persevered and accomplished much sewing for herself, as well as made Stella Condy a visit in Stockton. She says she seems to feel worse and worse each time she leaves home. Still she is cheerful and hopeful and enjoys her work Received a letter from Ada and wrote to the children in the East. (T.S.R. 42. 2 P.M. 66. S.S. 50.)

Apr. 15. Sabbath. Easter. The church was prettily decorated and Horace sang in the choir. He is gaining strength and hope. A little cabe of Ners Grimsley’s was brought from the mountain town where they now live and buried in the Brich Church cemetery. Received a letter from Geo. from San Isidro, Philippine Islands, written Mar. 8th.

Apr. 16. Monday. A postal from Theresa tells of her safe arrival in San Francisco I have written to Rev. S. L. Gerould of Hollis, N. H. and sent the genealogy of our family that I have been writing up at his request. He wishes to publish a book of the Lockes, just dating back to Father Locke’s father, and tracing the genealogy to the present time, just for the benefit of this branch of the family. It has been quite a task for one to get one family’s record written up all right. - Luther is today fortyfour years old. It does not seem possible. Soon his strength will begin to decline and as yet my longings for him are not satisfied. Father, bless one in him. (T.S.R. 44. 2 P.M. 78. S.S. 68.)

Apr. 19. Thursday. Weather partly cloudy. Celeste is four years old, a large boy of his age, and a great care because he is so meddlesome. And not only so, but he has to be watched very carefully or he will not be well. He has four birthday presents. Anna gave him a gold - lined silver cup and a linen picture book. Maggie Jones gave him a silk hdkf. and John a toy rabbit. Received letters from Willie and Mother and wrote to Ada. (T.S.R. 46. 2 P.M. 68. S.S. 58.)

Apr. 23. Monday. North windy - The grippe is epidemic in our town now and many are sick - more than I ever knew at one time before. All of Lou’s family have it, More or less, Mrs. Foote and Laura Bruml are in bed with it, so also Roland and some of his children, and James Thorp has it but has managed to be out of bed every day, although it would be better for him to keep his bed. Received letters from Eunice and Ida. The letter has moved to 2235 D Street, Eureka. I am having a new wire front yard fence built arow an improvement greatly needed. (T.S.R. 43. 2 P.M. 68. S.S. 64.)