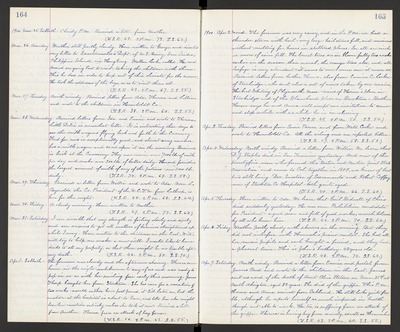 Mar. 26. Monday. Weather still partly cloudy. Have written to George and directed my letter to Quartermaster’s Dept. of U. S. Army, San Isidro, Philippine Islands, via Hong Kong. Wallace Locke called. He and Maud are going East to visit, taking the children with them. This he does in order to keep out of this eliminate for the summer. He took the addresses of the boys, so as to visit them all. (T.S.R. 43. 2 P.M. 67. S.S. 55.)

Mar. 28. Wednesday. Received letters from Ida and Eunice and wrote to Theresa, Little Delia is somewhat better. It is interesting these days to see the milk wagons flying back and forth to the Creamery. Fred for cows is exceptionally good, and almost every rancher has a milk wagon and cans upon it in the morning. Business is brisk at the Creamery. They now receive over 7000 lbs. of milk per day and make over 300 lbs. of butter daily. Howard farnishes the largest amount of milk of any of the patrons over 1000 lbs. daily. (T.S.R. 34. 2 P.M. 64. S.S. 58.)

Mar. 31. Saturday. I am sensible that my strength is failing slowly and surely and am anxious to get all matters of business straightened up while I may. Have written to the children in the East. Willie will try to help me make a new will. I would like to leave deeds to all my property, so that these might be no trouble after my death. (T.S.R. 46. 2 P.M. 80. S.S. 70.)

Apr. 1. Sabbath. The forenoon was cloudy and the afternoon showery. Theresa came home in the right unbeknown to any of us and was ready to pop in on us with her smiling face early this morning. James Thorp brought her from Stockton. She has come for a vacation of two weeks - would rather have post poned it till later on, but the matron at the hospitals is about to Crave, and told her she might lose her vacation entirely unless she took it now. Received a letter from Mother. Theresa fears an attack of hay fever. (T.S.R. 46. 2 P.M. 63. S.S. 55.)

1900. Apr. 2. Mond. The forenoon was very rainy, and in the P.M. we had a thunder storm with hail - very large hailstones fell, and remained without melting for hours in sheltered places, In all an inch or more of rain fell. The locust trees are in bloom fully two weeks earlier in the season than usual, the orange trees also, and all leafage is very abundant - it seems to me I never saw it more so. Received letters from brother Horace, also from Eunice C. Locke of Sturbridge, who sent also a set of views taken by our cousin, Hubert Whiting of Plymouth, mass. - views of Horace’s place in Sturbridge and of the Blanchard place in Brockton - Brother Horace says he and Anna will accept our invitation to come and stop awhile with us, while he is convalescing. (T.S.R. 49. 2 P.M. 50. S.S. 54.)

Apr. 4. Wednesday. North windy. Received a letter from Willie. We learn that D. J. Staples died in San Francisco yesterday. And now of the twentyfive men who formed the “Boston and Newton Joint Stock Association” and came to Cal. together in 1849, we know of but two still living - Dea. Sweetser of Sacramento and Robert Coffey now of Stockton Co. Hospital - both quite aged. (T.S.R. 40. 2 P.M. 66. S.S. 60.)

Apr. 5. Thursday. Have written to Ada. We learn that Gen’l Bidwell of Chico died suddenly yesterday. He was once Prohibition candidate for President - a good man and full of good works, much beloved by all who knew him. (T.S.R. 42. 2 P.M. 70. S.S. 64.)

Apr. 6. Friday. Weather partly cloudy with showers in the evening. But they did not interfere with Hannah’s piano recital. She had all her music pupils and each brought a friend, and they had a pleasant time. This is john’s birthday - 43 years old. (T.S.R. 48. 2 P.M. 72. S.S. 62.)

Apr. 7. Saturday. North windy. Received a letter from Eunice and postal from James Reid and wrote to the children in the East. James sent us word of the death of Aunt Olive Stetson on Mar. 31st at North Abington, aged 82 years. She died of the grippe. This P.M. Horace and Anna arrived from Oakland. He still looks quite feeble, although he reports himself as much improved in health though not able to work. He, too, is suffering from an attack of the grippe. Theresa is having hay fever severely, as well as Hannah. (T.S.R. 43. 2 P.M. 60. S.S. 55.)