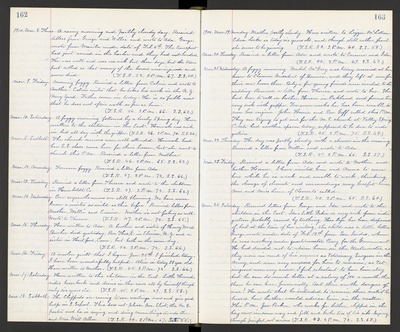 1900. Mar. 8. Thurs. A rainy morning and partly cloudy day - Received letters from George and Willie and wrote to Ada. George wrote from Manila under date of Feb. 6th. The transport had just arrived in the harbor and they had not landed. He was well and was sea sick but three days, but the transport rolled so that many of the horses were injured and some died. (T.S.R. 52. 2 P.M. 67. S.S. 60.)

Mar. 14. Wednesday. Our crysanthemums are still blooming. We have never know a winter so mild as this before. Received letters from Mother, Willie and Eunice. Mother is not feeling so well. Wrote to Theresa. (T.S.R. 47. 2 P.M. 72. S.S. 65.)

Mar. 21. Wednesday. A foggy morning. Mabel McGary was today married at her home to Clarence Morehead of Benicia, and they left at once for their new home then. Only a few young friends were invited to the wedding. Received a letter from Theresa and wrote to her. She had been to call on brother Horace in Oakland and found him very sick with grippe. For some weeks he has been unable to run his engine. John Harris and Rev. Goff called this P.M. They are trying to get aid for the M.E. church at Valley Spring. Celeste had another spasm today, supposed to be due to indigestion. (T.S.R. 45. 2 P.M. 75. S.S. 69.)

Mar. 23. Friday. Received a letter from Ada and wrote to Mother and brother Horace. I have invited him and Anna to come here while he is weak and unable to work, thinking the change of climate and surroundings may benefit him. Mrs. and Miss Linn of Clements called. (T.S.R. 40. 2 P.M. 65. S.S. 60.)

Mar. 24. Saturday. Received letters from George and Ida and wrote to the children in the East. Ida-s little Delia is very sick from indigestion probably caused by teething. Her life has been despaired of, but at the time of her writing, the child was a little better. George wrote render date of Feb. 13th from San Isidro, where he was working under quartermaster Perry for the Government. He had decided not to return home on the Westminster, as they were in need of his services as Veterinary Surgeon in the army, and were very anxious for him to remain, as Vet. surgeons were very scarce. I feel reluctant- to have him stay but he can do much better at a salary of $100. a month then than he can here, financially. But there are the dangers of war! He wrote that he intended to remain there until he heard how Luther would advise him in the matter. This P.M. Joe Parker, who works for Luther, slipped in the hay mow in some way and fell and broke two of his ribs. Injury through painful, not serious. (T.S.R. 43. 2 P.M. 72. S.S. 65.)