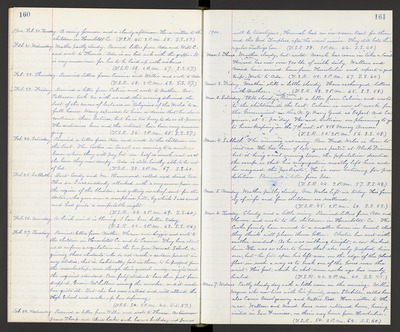 Feb. 23. Friday. Received a letter from Calvin and wrote to Mother. Rev. Patterson look tea with us and this evening delivered the last of the course of lectures on "Religious of the World" to a full house. Many expressed to him a desire that he should continue these lectures, but he is too busy to do so at present. The audiences here and the interest have been very encouraging. (T.S.R. 36. 2 P.M. 65. S.S. 57.)

Feb. 25. Sabbath. Bert Condy and Mr. Hammond called and dined here. This eve I was suddenly attacked with a very severe pain in the region of the bladder, and getting no relief, sent for the doctor, who gave me a morphine pill, by which I was eased and had quite a comfortable night. (T.S.R. 44. 2 P.M. 69. S.S. 60.)

Feb. 27. Tuesday. Received letters from Mother, Theresa and Lizzie and wrote to the children in Humboldt Co. and to Eunice. They have started to enforce a regulation in the San Jose Normal School, requiring those students who do not reach a certain percent in any studies, that is, habitually fail in them, to be dropped from the membership, even though their general average might reach the required standard. Over forty students have thus just been dropped, Gussie McLellan among the number, and it made her quite ill. But she has now rallied and will attend the High School and make up her deficiency. (T.S.R. 36. 2 P.M. 64. S.S. 57.)

Feb. 28. Wednesday. Received a letter from Willie and wrote to Theresa. As tomorrow James Thorp and Alma Locke each have a birthday and James

Mar. 4. Sabbath. The morning was rainy. Rev. Fred. Wales is here to visit us. He has been of late years pastor at Black Diamond but at being a coal mining town, the population deserted the camp, so that his congregation mostly left him and he resigned the pastorate. He as now lecturing for prohibition. Received a letter from Ida. (T.S.R. 44. 2 P.M. 57. S.S. 48.)

Mar. 6. Tuesday. Cloudy and a little rainy. Received letters from Ada and Theresa and wrote to the children in Humboldt Co. The Cooke family have moved to a smaller house in Sunol that they think will please them better. Chester has met with another accident. As he was milking bought, A cow kicked him. She was so close to him that she only pushed him over, but he fell upon his left arm on the edge of the plant floor in such a way as to break one of the bones near the wrist. His foot, which he shot some weeks ago has nearly healed. (T.S.R. 46. 2 P.M. 60. S.S. 55.)

Mar. 7. Wednes. Partly cloudy day with a little rain in the evening - Willie Wagner, who now lives with his family near Stockton, Called here also Carrie Montgomery and Nettie Ross. Have written to Theresa. Wallace and Maud have now returned home, having visited in San Francisco, on their way home from Honolulu. (T.S.R. 50. 2 P.M. 64. S.S. 60.)