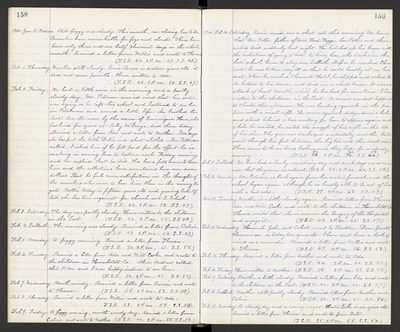 Feb. 2. Friday. We had a little rain in the morning and a partly cloudy day - Mr. Peterson received word that his sister was dying, so he left his school and hastened to see her in Petaluma and arrived a little before she breathed her last. An old man by the name of Dominique Herr, who has lived for years at Riley McGary’s, died there today. Received a letter from Ida and wrote to Mother. Ida says she has put the little Delia into short clothes. - Rev. Patterson called. I asked him if he felt paid for the effort he is making in coming here to lecture each Friday evening, and he replied that he did. He has a full house to hear him and the collections have sometimes been over seven dollars. But he feels more satisfaction in the thought of the numbers who come to hear him than in the money he gets. Nellie today is fifteen years old and growing tall. Of late, she has been organist for church and S. School. (T.S.R. 44. 2 P.M. 58. S.S. 47.)

1900. Feb. 10. Saturday. Susie made me a short call this morning. We learn that Mr. Potter, father of Mrs. Fred, Figge, Lou Potter and their sisters, died suddenly last night. He hitched up his team with the intention of going to Lodi to bring Lou, who teaches in the Lodi school, Home to stay over Sabbath. Before he reached Clements, he was taken very ill so that he could hardly sit on his seat. When he reached Clements Hotel, he stopped and asked to be helped to lie down, and died in a short time. It was an attack of heart trouble which he has had for some time. I have written to the children in the East. A serious accident happened to Chester this afternoon. He was hunting squirrels in the pasture with a small rifle. He saw a squirrel dodge down a hole and stood behind a tree waiting for him to appear again and while he waited, he rested the muzzle of his rifle on the top of his shoe. The gun was discharged accidentally and the ball went through his foot between the big toe and the next one. There seem to be no bones broken, and they hope for a speedy recovery. (T.S.R. 34. 2 P.M. 60. S.S. 53.)

Feb. 13. Tuesday. Weather is a little cloudy again. Received letters from Theresa Ada and Will Cooke and wrote to the children in Humboldt Co. Theresa writes that she is now in the Surgery of the Hospital and enjoys it. (T.S.R. 40. 2 P.M. 65. S.S. 57.)