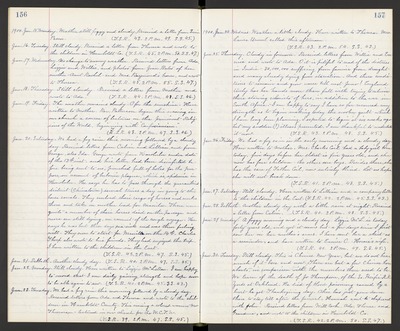 Jan. 19. Friday. The weather remains cloudy - O for the sunshine. Have written to Mother. Rev. Patterson began this evening in our church a course of lectures on the prominent Religious of the World, beginning with "Confucianism." (T.S.R. 43. 2 P.M. 47. S.S. 46.)

Jan. 20. Saturday. We had a fog rain this morning followed by a cloudy day. Received letters from Calvin and Lillian, and from George, also Ida. George wrote from Honolulu under date of the 13th inst. and his letter had been disinfected before being sent to us, punched full of holes for the purpose, on account of bubonic plague, which is epidemic in Honolulu. He says he has to pass through the quarantines district (Chinatown) several times a day in going to the horse corrals. They unload their cargo of horses and mules there and take on another load for Manila. There were quite a number of their horses died on the passage and more are still dying, on account of the rough voyage. He says he was but three days sea - sick and was then feeling well. They were to start for Manilla on the 14th. Charles Thorp also wrote to his friends. They had enjoyed the trip. I have written to the children in the East. (T.S.R. 42. 2 P.M. 47. S.S. 45.)

Jan. 23. Tuesday. We had a fog rain this morning followed by a cloudy day. Received letters from Ada and Theresa and wrote to the children in Humboldt County. This evening a colored woman Mrs. Thurman - lectured in our church for the W.C.T.W. (T.S.R. 39. 2 P.M. 47. S.S. 45.)

Jan. 25. Thursday. Cloudy in forenoon. Received letters from Willie and Eunice and wrote to Ada. O it is pitiful to read of the distress in India - 30,000,000 suffering from famine from drought and many already dying from starvation. And these conditions to remain and grow worse till next June! England truly has her hands more than full with trying to relieve there starving colonists of hers, in addition to the war in South Africa. - I am happy to say I have so far recovered my strength as to begin making today the woolen guilt which I have long been planning. I expected to begin it six weeks ago but my sudden (2) illness prevented. I am thankful to undertake it now. (T.S.R. 43. 2 P.M. 48. S.S. 45.)

Jan. 26. Friday. We had a fog rain in the early morning and a cloudy day. Have written to Mother. Mrs. Charles Coil has a baby girl born today, five days before her eldest is five years old, and she now has four children - the others are boys. Besides there, she has the care of Father Coil, Now entirely blind. Let us hope she will not break down. (T.S.R. 41. 2 P.M. 48. S.S. 45.)

Jan. 30. Tuesday. Still cloudy. This is Chinese New Year, but we do not hear much of it here and now. There are but a few Chinese here abouts, in comparison with the numbers there used to be. We learn of the death of Jo Thompson, of the So. Pacific R.R. Yards at Oakland. He died of blood poisoning caused by a hurt he got Thanksgiving day. Alice has just gone down there to stay till after the funeral. Hannah went to chaparral with John. Received letters from Will Cooke, Ada, Theresa and Grandma, and wrote to the children in Humboldt Co. (T.S.R. 42. 2 P.M. 50. S.S. 47.)