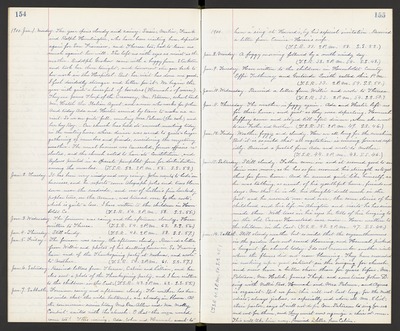 1900. Jan. 1. Monday. The year opens cloudy and rainy. Susie, Mertice, Frank and Ralph Huntington, who have been visiting here, departed again for San Francisco, and Theresa too, had to leave us much against her will. She left us with eyes as moist as the weather. Rudolph Gnekow came with a buggy from Stockton and took her there tonight, and tomorrow she goes back to her work in the Hospital. But her visit has done me good. I feel decidedly stronger and better for it. We begin the year with quite a houseful of boarders (Hannah-s of course). They are James Thorp of the Creamery, Mr. Peterson, school teacher Mr. Hatch the Station Agent and a man who works for John. And today Ada and Hester arrived by train to make us a visit. So we are quite full, counting Mrs. Palmer (the cook) and her boy Roy. - Our church has held its annual meeting today in the meeting house where dinner was served to quite a large gathering of members and friends, considering the very stormy weather. The usual business was transacted, former officers re - elected, and the church voted to have its Constitution and Bylaws printed in a separate pamphlet form for distribution among the members. (T.S.R. 52. 2 P.M. 55. S.S. 53)

Jan. 2. Tuesday. It has been very windy and very rainy. John went to Lodi on business, and he reports some telegraph poles and trees blown down near the roadside, and one of Luther-s fine Lombardy poplar trees, on the Avenue, was turned over by the roots, which is quite a loss. I have written to the children in Humboldt Co. (T.S.R. 54. 2 P.M. 58. S.S. 55.)

Jan. 5. Friday. The forenoon was rainy, the afternoon cloudy - Received a letter from Willie and photos of his dwelling house in So. Framing ham and of the Thanks giving party at Nashua, and wrote to Mother. (T.S.R. 50. 2 P.M. 61. S.S. 57.)

Jan. 7. Sabbath. Forenoon rainy and afternoon cloudy. The weather has been So mild that the wild buttercups are already in bloom. At the communion service today Mrs. Ora Allen and Mrs. Molly Condict united with the church. O that the men would come too! This evening, Ada, John and Hannah went to

Jan. 13. Saturday. Still cloudy - Father came in and it seemed good to see him once more, as he has so far recovered his strength as to get there far from home. And he seemed quite like himself, as he was talking, as usual, of his youthful home, friends and days. Now that he is old, his thoughts dwell much in the past and he recounts over and over, the same stories of his childhood and his life in Abington and visits he has since made there. With tears in his eyes he tells of his longing to see the old Carver Homestead once more. - Have written to the children in the East. (T.S.R. 43. 2 P.M. 47. S.S. 44.)

Jan. 14. Sabbath. Still cloudy weather but so mild that the chrysanthemums in the garden have not ceased blooming, and Hannah picked a bouquet for church today. I do not remember another winter when the flowers did not cease blooming. They have succeeded in working up a good interest in the singing for church and now have a better choir than for years before. Mr. Peterson, Mr. Hatch, James Thorp and sometimes John D. sing with Nettie Ross, Hannah and Mrs. Palmer, and Agnes is organist. But we fear this will not last long, for the Methodists, always jealous, as especially and above all Mr. Eliot, their pastor, says it will not do for Mr. Peterson to sing for us and not for them, and they must now organize a choir at once. This will take him away. Received a letter from Calvin. (T.S.R. 41. 2 P.M. 50. S.S. 45.)