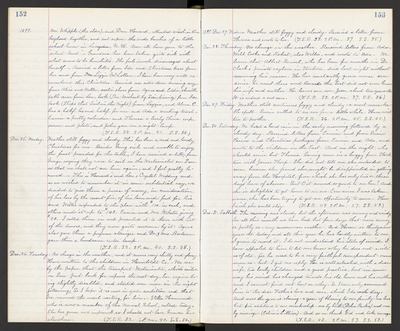 1899. Mr. Whipple (the elder), and Dan Howard, attended school in their boyhood together, and sat upon the rude benches of a little school-house in Langdon, N. H. Now all have gone to the "silent land." - Grandma has been taken quite sick with what seems to be bronchitis. She feels much discouraged about herself. - Received a letter from Ida and Christmas boxes from her and from Lizzie McLellan. I have been very well remembered this Christmas. Received an cider-down dressing sacqus from Alice and Nellie, arctic shoes from Agnes and Eddie, chenille table - cover from Lou, book (Pan-Michael by Sienkiewicz) from Ida book (Ships that Sail in the Night) from Lizzie, and Alma C. has a hdkf. box and hdkf. for me and Ada a combing-towel, Eunice a pretty calendar and Theresa a lovely China cup, saucer and plate, and John gave me a night-lamp. (T.S.R. 34. 2 P.M. 41. S.S. 38.)

Dec. 25. Monday. Weather still foggy and cloudy - This has been a sad and lonely Christmas for me. Besides being sick and unable to enjoy the feast provided for the table, I have received a letter from George, saying they were to sail on the Westminster on Sun. so that we shall not see him again, and I feel greatly bereaved. - This is Howard's and Lou's Crystal Wedding and as we wished to remember it in some substantial way, we decided to give them a purse of money, in consideration of his loss by the recent fire, of his barn and feed for his cows. Willie responded to the plan with $100. in cash, and others made it up to $143. Eunice and Mr Webster giving $20. I called them in and presented it to them with list of the donors, and they were quite overcome by it. Agnes also gave them a perfume atomizer and Dr. & Mrs. Barbour gave them a handsome center lamp. (T.S.R. 32. 2 P.M. 40. S.S. 38.)

Dec. 26. Tuesday. No change in the weather, and it seems very chilly and gloomy. Have written to the children in Humboldt Co. - We see by the paper that the transport Westminster, which sailed on Sun. put back for repairs the next day, her engine being slightly disabled, and started once more in the night following. So I hope it is now in good condition and that Geo. reviewed the mail waiting for him. - Stella Hammond who is now a member of the Normal School, called today. She has grown and improved so I should not have known her elsewhere. (T.S.R. 32. 2 P.M. 40. S.S. 36.)

Dec. 28. Thursday. No change in the weather. Received letters from Ada. Will Cooke and Robert, also Willie, and wrote to Ada. We learn that Albert Bruml, who has been for months in Dr. Clark's private asylum in Stockton, died last night without recovering his reason. He has constantly grown worse ever since he went there and towards the last did not even know his wife and mother. He leaves one son, Jesse, about ten years old. It is indeed a sad case. (T.S.R. 33. 2 P.M. 37. S.S. 36.)

Dec. 30. Saturday. We had a hard rain in the early morning followed by a cloudy day. Received letters from Eunice and from Susie Pascoe and Christmas packages from Eunice and Ada, and wrote to the children in the East. And in the night, who should arrive but Theresa having come in a buggy from Stockton with James Thorp. She did not tell me she intended to come because she feared she might be disappointed in getting away from the Hospital, from which she has only two or three days' leave of absence. But O it seemed so good to see her! And she is delighted to get home to see us. Ever since I was taken worse, she has been trying to get an opportunity to come. How I wish she could stay. (T.S.R. 49. 2 P.M. 57. S.S. 53.)

Dec. 31. Sabbath. The morning was cloudy but the afternoon was sunny and windy. In all this month we have had but four days that were sunny or partly so - very uncommon weather. And Horace is thirtynine years old today, and all this year he has hardly Written to me. I grieve to record it. I do not understand his state of mind. I have appealed to him to let me know why he does not write as of old, for he used to be a very faithful correspondent - none more so - but I get no reply. He is well situated, with a dear wife, two lovely children and a good practice, but in some way his mind has changed towards his old home and his mother and I cannot find out how or why. So I can only commend him to the dear Father's love and care, which I do each day. And now the year is closing - a year of blessing to our family - no loss but two additions to our membership - one by birth (Delia Parker) and one by marriage - (Calvin's Lillian). And so we thank God and take courage. (T.S.R. 43. 2 P.M. 57. S.S. 53.)