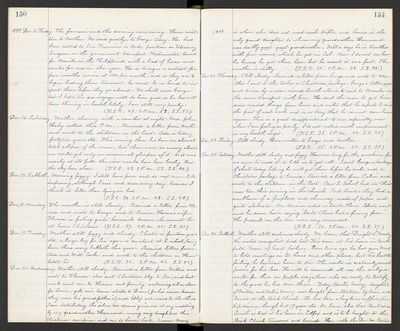 1899. Dec. 15. Friday. The forenoon and the evening were rainy - Have written to Mother. We said goodbye to George today. He has been called to San Francisco to take position as Veterinary Surgeon on the government transport Westminster, bound for Manila in the Philippines, with a load of horses and mules for use in the war. He is to sign a contract for four mont's since at $.100. per month, and as they are to begin loading them tomorrow, he must be on hand to inspect them before they go aboard. We shall miss George but I hope the sea voyage will do him good, as he has not been thriving in health lately. I am still very poorly. (T.S.R. 49. 2 P.M. 53. S.S. 51.)

Dec. 16. Saturday. Weather showery with a rainbow at night. Mrs. John Haley called this P.M. - Received a letter from Mother and wrote to the children in the East. Ada is today forty two years old. This evening there has been an almost total eclipse of the moon, but there were so many clouds we could get only an occasional glimpse of it. As it was nearly at its fall, the view would have been lovely had the sky been clear. (T.S.R. 43. 2 P.M. 55. S.S. 48.)

Dec. 18. Monday. The weather is still cloudy. Received a letter from The usa and wrote to George and to Eunice, Horace's wife. Theresa is feeling quite homesick because she cannot be at home Christmas. (T.S.R. 37. 2 P.M. 45. S.S. 41.)

Dec. 19. Tuesday. Weather still foggy and cloudy. Chester is fourteen years old, a large boy for his age - is constant at S. school, having been there every Sabbath this year. Received letters from Ada and Will Cooke and wrote to the children in Humboldt Co. (T.S.R. 35. 2 P.M. 41. S.S. 41.)

Dec. 20. Wednesday. Weather still cloudy. Received a little from Willie and wrote to Theresa - also sent Christmas pkg. to Ida, and last week sent one to Horace and family, containing silver spoon for Louise, gold coin bosom - studs to Dean (for his name because they were his grand father's) and hdkf, and views to the others. I am distributing the silver tea-spoons given me at my wedding by my grandmother Hammond, among my daughters this Christmas - one a piece - and one to Louise Locke, because Mary

1899. is where she does not need such trifles, and Louise is the only grand - daughter to whom my grandmother Hammond was doubly great - great grandmother. Willie says he is troubled with pin - worms, which he got in Cal. Now I do not see how he knows he got them here, but he asserts it as a fact. The weather is chilly. (T.S.R. 35. 2 P.M. 38. S.S. 38.)

Dec. 21. Thursday. Still cloudy. Received a letter from George and wrote to Ada. Also I sent to the Cookes a Christmas package. George's letter was sent to me by a man named Smith who is to sail to Manila on the same transport with him. He sent the man to get him some needed things from home and writes that he expects to sail the first of next week and is so busy that he cannot come home again. This is a great disappointment to me, especially now when I am feeling so poorly. I do not notice much improvement in my health as yet. (T.S.R. 35. 2 P.M. 40. S.S. 40.)

Dec. 23. Saturday. Weather still cloudy and foggy. How we long for the sunshine, for we seem to need it to help us to get well. I sent George a package of skirts today, hoping he will get them before he sails, and a Christmas package to Eunice. Received a letter from Calvin and wrote to the children in the East. Our S. School had its Christmas tree this evening in the church. And besides they had a semblance of a fireplace and chimney, made of paper and quite elaborate. Mr. Miener acted as Santa Claus. Celeste went and he came home saying, "Santa Claus had a funny face." The presents on the tree were very numerous. (T.S.R. 36. 2 P.M. 40. S.S. 37.)

Dec. 24. Sabbath. Weather still continues cloudy. We learn that Dwight L. Moody the noted evangelist, died last Fri. noon at his home in North field, Mass. of heart failure. Sometime ago he had gone West to hold meetings in St. Louis and other places, but his health failing, he hastened home to die. The world is certainly much poorer for his loss. He will be mourned all over the civilized world, for there are people everywhere who are ready to testify to the good he has done them. Today, Amelia Mowry, daughter of Milton and Nellie Mowry, was brought from Stockton by train and buried at the Brick Church. She had been a long time sufferer from hip disease, through but 19 years old. We learn also that Rev. Esdras Smith is dead at his home in Colfax and is to be brought to the Brick Church tomorrow and buried. He, with the Dr. Mr. Portman