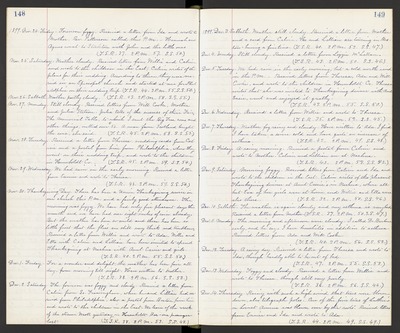 Nov. 25. Saturday. Weather cloudy. Received letters from Willie and Calvin and wrote to the children in the East. Calvin writes of the plans for their wedding. According to them, they were married in an Episcopal church and started at once for Philadelphia on their wedding trip. (T.S.R. 44. 2 P.M. 55. S.S. 50.)

Nov. 27. Monday. Still cloudy. Received letters from Will Cooke, Mother and Julia Stetson, Julia tells of the success of their Fair. The Memorial Table, to which I sent the Big Tree cone and other things, melted over $50. A man from Scotland bought the cone, she said. (T.S.R. 45. 2 P.M. 58. S.S. 55.)

Nov. 30. Thanksgiving Day. There has been a Union Thanksgiving service in our church this P.M. and a fairly good attendance. the morning was foggy. We have had only five pleasant days this month and we have had over eight inches of rain already. But the weather has been so mild and there has been so little frost that the flies are still very thick and troublesome. Received a letter from Willie and wrote to Ada - Willie and Etta with Calvin and Lillian have been invited to spend Thanksgiving at Nashua with Aunt Carrie and girls. (T.S.R. 40. 2 P.M. 55. S.S. 50.)

Dec. 2. Saturday. the forenoon was foggy and cloudy. Received a letter from Calvin from So. Framingham, where he and Lillian had arrived from Philadelphia, also a postal from Boston from him and wrote to the children in the East. We leave of the wreck of the steams Weott yesterday or Humboldt Bar - one passenger lost. (T.S.R. 38. 2 P.M. 53. S.S. 48.)

Dec. 5. Tuesday. We had rain in the early morning, but a cold north wind in the P.M. - Received letters from Theresa, Ada and Will Cooke, and wrote to the children in Humboldt Co. Theresa writes that she was invited to Thanksgiving dinner with Aunt Susie, went and enjoyed it greatly. (T.S.R. 43. 2 P.M. 55. S.S. 50.)

Dec. 9. Saturday. Morning foggy. Received letters from Calvin and Ida and wrote to the children in the East. Calvin writes of the pleasant Thanksgiving dinner at Aunt Carrie's in Nashua, where all but Eva of her girls were at home and Willie and Etta were also there. (T.S.R. 32. 2 P.M. 50. S.S. 46.)

Dec. 14. Thursday. Rainy with such a high wind that trees were blown down, also telegraph poles. One of the fine trees of Luther's on Locust Avenue was blown over by the roots. Received letters from Eunice and Ida and wrote to Ada. (T.S.R. 44. 2 P.M. 49. S.S. 49.)