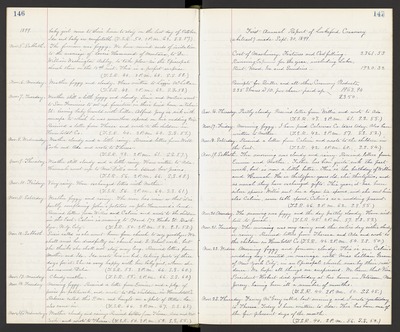 Nov. 5. Sabbath. The forenoon was foggy. We have received cards of invitation to the marriage of Louise Hammond of Montana, to Dr. William Washington Ashley, to take place in the Episcopal church there on the 15th inst. This is a perfect surprise. (T.S.R. 44. 2 P.M. 65. S.S. 58.)

Nov. 7. Tuesday. Weather still a little foggy and cloudy. Susie and Mertice went to San Francisco to set up furniture in their hired house on Valencia St. leaving baby Gerould with Lilla. Alfred Jory is sick with mumps to which he was somewhere exposed on his wedding trip. Received a letter from Theresa and wrote to the children in Humboldt Co. (T.S.R. 40. 2 P.M. 64. S.S. 55.)

Nov. 12. Sabbath. Susie called as she went home from church to say goodbye. We shall miss her dreadfully in church and S. School work, but she thinks she shall not stay away long. Received letters from Mother and Ida. Ida wrote hers in bed, taking parts of three days for it. She is very happy with her baby girl, whom she has named Delia. (T.S.R. 53. 2 P.M. 66. S.S. 60.)

Nov. 19. Sabbath. The morning was cloudy and rainy. Received letters from Eunice and Mother. Father has been quite sick the past week, but is now a little better. This is the birthday of Willie and Hannah. He is thirtyfour years old, she thirtytwo, and as usual they have exchanged gifts. This year, it has been silver spoons. Willie sent her a dozen tea - spoons, and she sent him also Calvin, some table spoons. Calvin's as a wedding present. (T.S.R. 46. 2 P.M. 62. S.S. 55.)

Nov. 22. Wednes. Morning foggy and forenoon cloudy. This is our Calvin's wedding day - united in marriage with Miss Lallian Green of New York City, in an Episcopal church near by their residence. We hope all things are suspicious. We learn that Vice President Hobart died yesterday at his home in Paterson, New Jersey, having been ill a number of months. (T.S.R. 44. 2 P.M. 50. S.S. 45.)