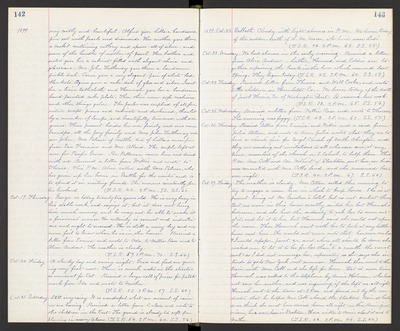 1899. very costly and beautiful. Alfred gave Lilla a handsome pin set with pearls and diamonds. Her mother gave them a casket containing cutlery and spoons - all of silver - and some of the handles of mother - of - pearl. Her brothers and sisters gave her a cabinet filled with elegant china and glassware. Mrs. John Trethaway gave them a handsome pickle dish. Carrie gave a very elegant pair of white bed blankets. Agnes gave a cake dish of glass and silver. I sent her a linen tablecloth and Hannah gave her a handsome hand - painted cake plate. Then there were sofa cushions and other things galore. The parlor was emptied of all furniture except piano and cabinets and darkened, then lit by a number of lamps, and beautifully trimmed with ever greens. Those present besides her own family and ours were Grandpa, all the Jory family and Mrs. John Tretheway and son John, Mrs. Palmer of Seattle, two of Lilla's nurse friend from San Francisco and Mrs. Allard. The couple left at once for Pacific Grove. Rev. Patterson came here and dined with us. Received a letter from Willie and wrote to Theresa. This P.M. Alice called with Mrs. Palmer, who has given up her home in Seattle for the winter and is to spend it in visiting friends. She mourns constantly for her husband. (T.S.R. 46. 2 P.M. 73. S.S. 66.

Oct. 19. Thursday. George is today twenty two years old. He is very busy in his stable work, and enjoys it, but it does not bring him much money, and he may not be able to make it a financial success. He certainly is earnest and industrious and ought to succeed. He is still a noisy boy and we never fail to know when he is in the house. Received a letter from Eunice and wrote to Ada, to Nettie Ross and to Alice Andrew. The weather is cloudy - (T.S.R. 57. 2 P.M. 70. S.S. 66.)

Oct. 21. Saturday. Still very rainy. It is wonderful what an amount of rain we are having. Received a letter from Calvin and wrote to the children in the East. The ground is already too soft for plowing in may places. (T.S.R. 54. 2 P.M. 60. S.S. 56.)

Oct. 23. Monday. We had showers in the early morning - Received a letter from Alice Andrew. Luther, Howard and Eddie are together repairing the break in the levee which occurred last spring. They began today. (T.S.R. 43. 2 P.M. 60. S.S. 53.)

Oct. 26. Thursday. Received letters from Eunice and Willie and a card from Julia Stelson, and wrote to Ada. Julia writes that they are to have a church fair for Cong'l Church of North Abigton, and they are sending out invitations to all who were over, at any time, members of the church or S. School, to help them. This P.M. Mrs. Cobb and Mr. Wilhoit of Stockton met here on business connected with Mrs. Cobb's land, and she remained here over night. (T.S.R. 40. 2 P.M. 67. S.S. 60.)

Oct. 27. Friday. The weather is cloudy. Mrs. Cotton called this morning to try to engage a room here in which to keep house. She is at present living at Mr. Garretson's hotel, but is not content there. But no room in this house exactly suited her but Hannah's bedroom, and she had the audacity to ask her to move out of it, and let it to her, but Hannah said she could not spare the room. Then Hannah went with her to look at my little house next here. She would not move into that, however, unless. I would repaper, paint, D.C. and when all should be done, she wished me to let it to her for less than $5. a month - the usual rent - so I did not encourage her, especially as she says she intends to go to New York next summer. Hannah then went to the train with Mrs. Cobb, and she left for home. But at noon time Hannah was called to the telephone by Annie Holman, who had not seen her mother, and was inquiring if she left us all right. Hannah went to the train at 2 P.M. and found out by the conductor that he helped Mrs. Cobb aboard the Stockton train at Lodi so we think she must have arrived home all right [?] this, Annie just missing her somewhere in Stockton, Have written to Annie about it and to Mother. (T.S.R. 40. 2 P.M. 66. S.S. 60.)