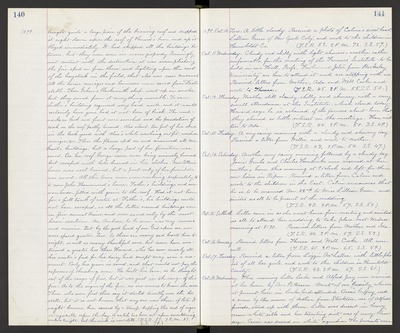 1899. brought quite a large piece of the burning roof and dropped it right down upon the roof of Howard's barn, and up it blazed immediately. It had skipped all the buildings between, but they were soon in worse jeopardy. Seemingly not content with the destruction it was accomplishing the fire sped on from there and lightning upon the rest of the haystack in the field, that also was soon consumed. All the horses, carriages and harnesses were saved from Dial's stable. Then Gehan's blacksmith shop went up in smoke, but they saved from it everything movable. To save Luther's building required very hard work, and it would certainly have gone, had it not been of brick. The woodworks on back and front were scorched and the foundation of tank on the roof partly burned. Also about ten feet of his shed in the backyard with Alice's whole washing outfit, washer winger, X.C. Then the flames sped on and consumed all Mrs. Grant's buildings, but a large part of her furniture was saved. On her roof, George came near being seriously burned but escaped with holes burned in his clothes. Mrs. Cotton's house was next burned, but a part only of her furniture was saved. All this time men were working desperately to to save John Hammond's house, Father's buildings and our warehouse, filled with grain to the roof. Had it now been for a full tank of water at Father's, his buildings could not have escaped, as all the latter named buildings were on fire several times, and were saved only by the most heroic exertions. Mr. Ambrose, to be sure, was very nervous and anxious. But by the good hand of our God upon us, we were spared greater loss. So there are many sad hearts here tonight, as well as many thankful ones, but none have sustained a greater loss than Howard, who has seen nearly all his winter's feed for his dairy herd swept away as in a moment. Only his grain is saved, and that would not pay the expenses of threshing even. He built his barn, as he thought, out of the range of fires, but it was just in the range of this fire. As to the origin of the fire, no one seems to know the caner. Those who were first there say it started directly over the box stalls, but it is not known that any one was there of late. It might however been caused by a tramp dropping the end of cigar or cigarette upon the hay. A watch has been set upon emouldering embers tonight, but the wind is now still. (T.S.R. 57. 2 P.M. 87. S.S. 79.)

Oct. 11. Wednesday. Cloudy and chilly with light showers - weather rather unfavorable for the meeting of the Farmer's Institute - to be held in our Hall. Profs. Fowler and Jeter from Berkeley University are here to attend it and are stopping with us. Received letters from Mother, Ada and Will Cooke and wrote to Theresa - (T.S.R. 45. 2 P.M. 55.S.S. 50.)

Oct. 12. Thursday. Weather still cloudy, chilly and showery, with a very small attendance at the Institute, which closed today. Howard says he is ashamed of the farmers about here that they showed so little interest in the meetings. Have written to Ada. (T.S.R. 44. 2 P.M. 50. S.S. 49.)

Oct. 14. Saturday. Another very rainy morning followed by a cloudy day. Josie Grubs and Charles Hendricks were married at her mother's home this morning at 9 o'clock and left for their new home in Ripon. Received a letter from Calvin and wrote to the children in the East. Calvin announces that he is to be married Nov. 22nd to Miss Lillian Green, and invites us all to be present at the wedding. (T.S.R. 43. 2 P.M. 57. S.S. 50.)

Oct. 18. Wednesday. This morning Lilla Locke and Alfred Jory were married at her home by Rev. Patterson. Most of our family who are at present here in Lockeford attended. Carrie Geffroy and a man by the name of Arthur from Stockton, one of Alfred's friends, stood up with them. Lilla was dressed in heavy cream - white silk and her traveling suit was of navy blue serge. Carrie was dressed in white organdie. The presents were