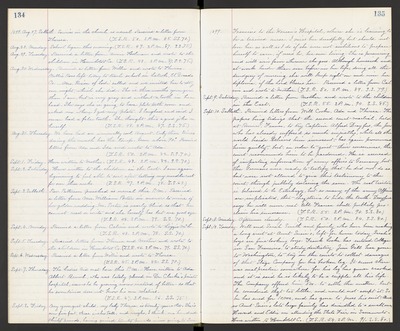 Aug. 30. Wednesday. Received a letter from Willie and wrote to Theresa. Nettie Ross left today to teach school in Latrobe, El Dorado Co.- Mrs. Rixon of Lodi called and we invited her to stay over night, which she did. She is three month's younger than I am, but is very gray and without a tooth in her head. She says she is going to have plate teeth soon and asked me where I got my plate. I laughed and said I never had a false tooth. She thought this a good joke on herself. (T.S.R. 48. 2 P.M. 87. S.S. 75.)

Sept. 3. Sabbath. Rev. Patterson preached as usual this P.M. Received a letter from Mrs. William Porter in anever to mine of her golden wedding. Mr. Porter is nearly blind so that he cannot read or write and she herself has but one good eye. (T.S.R. 48. 2 P.M. 79. S.S. 70.)

Sept. 8. Friday. My youngest child, my baby Theresa, is twenty years old. She is over five feet, three inches tall, and weighs, I think one hundred thirty pounds, having gained twenty pounds since going to San

1899. Francisco to the Woman's Hospital, where she is learning to be a trained nurse. I Miss her dreadfully but should not love her as well as I do if she were not ambitious to prepare herself to earn, if need be, her own living. She is persevering and will win favor wherever she goes. Although homesick and at work harder than ever before in her life doing all the drudgery of nursing, she will keep right on and win her diploma, if the Lord blesses her. Received a letter from Calvin and wrote to Mother. (T.S.R. 50. 2 P.M. 89. S.S. 79.)

Sept. 10. Sabbath. Received letters from Will Cooke, Ada and Theresa. The papers bring tidings that the second cout martial, held at Remes, France, to try Captain Alfred Dreyfus, the Jew who has already suffered so much unjustly, while all the world beside believes him innocent, has again pronounced him guilty, but, in order to quiet their consciences, the court recommends him to be pardoned. He is accused of imparting information of army affairs to Germany, But the Germans were ready to testify that he did not do so, but were not allowed to give this testimony to the court, though publicly declaring the same. The real traitor is believed to be Esterhazy, but so many of the army Officers are implicated, that they strive to hide the truth. Dreyfus says he will never rest till France shall publicly proclaim his innocence. (T.S.R. 55. 2 P.M. 94. S.S. 80.)

Sept. 12. Tuesday. Will and Sarah Smith and family, who have been making a long visit at Aunt Susie's, left for home today. Sarah's boys are fine - looking boys. Frank Locke has entered College in San Francisco, to study dentistry. Jim Gill has gone to Washington, to try in the courts to collect damages of that Stage Company for his broken leg. It seems there was malpractice somewhere for his leg has grown crooked and it is said he is likely to be a cripple all his life. The Company offered him $500. to settle the matter, but he considered that too little, and would not accept it. So he has sued for $10,000, and has gone to press his suit. And so Aunt Susie's late large family has dwindled to a small one. Howard and Eddie are attending the State Fair in Sacraments. Have written, to Humboldt Co. (T.S.R. 54. 2 P.M. 91. S.S. 80.)