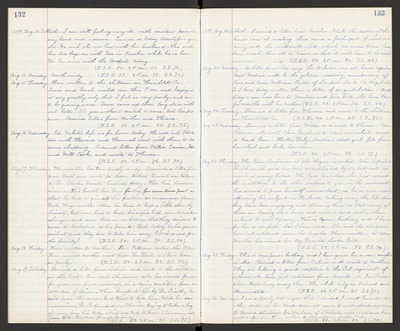 Aug. 15. Tuesday. Have written to the children in Humboldt Co. Susie and Sarah visited me this P.M. and I enjoyed it very greatly, only that I feel so very poorly, and seem to be growing worse. Susie came up these long stairs without help. She goes without crutch or cane, but limps some. Received letters from Mother and Theresa. (T.S.R. 50. 2 P.M. 85. S.S. 75.)

Aug. 16. Wednesday. Ed. Webster left us for home today. He rode into Stockton with Howard and Hannah went with them to do some shopping. Received letters from Willie, Eunice, Ida and Will Cooke and wrote to Theresa. (T.S.R. 50. 2 P.M. 78. S.S. 70.)

Aug. 17. Thursday. The weather has been partly cloudy. Received a letter from Joan Bates and wrote to Ada. Albert Bruml was taken to Dr. Clark's private hospital today. He has become insane. His health has been failing for some time past so that he had to give up his position as messenger for Wells, Fargo and Co. - then he tried to keep a little store by himself, but soon had to have his wife's help even to make change, and soon became so helpless that they decided to come to Lockeford to his parents. But lately he has grown violent, and they had to take him away. O it is so sad for the family! (T.S.R. 54. 2 P.M. 76. S.S. 64.)

Aug. 19. Saturday. Received a letter from Calvin and wrote to the children in the East. Our wash Chinaman who has ironed for us for years, was found seemingly in a dying condition from an over-dose of opium, When brought to life by Dr. Priestley, he said some Chinaman had tried to kill him. While he was unconscious, Dr. P. found some Chinese trying to take a bag of money from his body, which was tied to him. The money was given to Mr. Garretson for safe keeping. (T.S.R. 50. 2 P.M. 85. S.S. 73.)

Aug. 21. Monday. A letter from Ida says the Websters are at home again. Next Wednes. will be the "golden wedding" anniversary of Rev. and Mrs. William Porter of Prospect Park, Los Angeles Co. So I have today written them a letter of congratulation. And today a son was born to Mertice and Jim Gill, who have been for months with her mother. (T.S.R. 50. 2 P.M. 76. S.S. 64.)

Aug. 24. Thursday. The Peace Conference at the Hague is ended. The hopeful think much good has been accomplished by it, but not as much as many hoped. The Czar Nicholas, who first issued the invitation to the other nations to join in the movement, has seemed to prove himself inconsistent, as he is even now oppressing his subjects in Finland, taking away the liberties they have been enjoying, and oppressing them so that many of them are leaving their homes and native land rather than submit to such tyranny. This is Agnes's birthday and I have for her a comforter that I have made. She and the children have not returned from Los Angeles. Have written to Ada. Mertice has named her boy Gerould Locke Gill. (T.S.R. 52. 2 P.M. 93. S.S. 76.)

Aug. 25. Friday. This is Mrs. Jones's birthday and I have given her a new comforter also. Received a letter from Calvin and wrote to Mother. They are holding a grand reception to the Cal. regiment of soldiers who have just returned from Manila, in San Francisco - Bert Condy among them. The whole city is trimmed and illuminated. (T.S.R. 48. 2 P.M. 85. S.S. 75.)

Aug. 26. Saturday. I was so poorly last night that I decided I must have some other doctor, as Dr. Hull does not seem to understand my case. So Howard telephoned for Dr. Cross of Stockton, who came and prescribed for me. Have written to the children in the East. (T.S.R. 50. 2 P.M. 84. S.S. 70.)