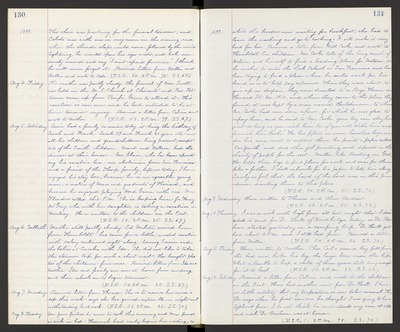 1899. The choir was practicing for the funeral tomorrow, and Celeste was with me in my room in the evening, and when the thunder claps would come, followed by the vivid lightening, he would open his eyes wide, and look nervously around and say "I aint afraid fummer." I think he will never forget it. Received letters from Willie and Nellie and wrote to Ada. (T.S.R. 50. 2 P.M. 75. S.S. 65.)

Aug. 4. Friday. The weather was partly cloudy. The funeral of Mrs. Swett was held in the M.E. Church at Clements and Rev. Patterson came up from Pacific Grove to attend it. His vacation is now over, and he had intended to be at home tomorrow anyway. Received a letter from Calvin and wrote to Mother. (T.S.R. 55. 2 P.M. 79. S.S. 67.)

Aug. 5. Saturday. Susie had a family re - union today, it being the birthday of Sarah and Frank - Sarah 39 and Frank 21 years old - and all her children and grandchildren being present, except two of the Smith children. Maud and Wallace had the dinner at their house. - Mr. Klein, who has been spending his vacation here - an electrician from San Francisco - and a friend of the Thorp family, left us today. I have enjoyed his stay here, because he is an agreeable young man, a native of Mass. and graduate of Harvard, and because he enjoyed playing Word Game with me. Mrs. Flanders called this P.M. She is keeping house for Fanny McGary, who, with her daughters, is taking a vacation in Monterey. Have written to the children in the East. (T.S.R. 50. 2 P.M. 85. S.S. 67.)

Aug. 6. Sabbath. Weather still partly cloudy. Ed. Webster arrived here from Humboldt - has come for a little needed vacation with salary continued right along, leaving Eunice and the babies at Eureka with Ida. She did not like to take the steamer trip for such a short visit. He brought photos of the children - fine ones. Received letters from Ida and Mother. Ida and family are now at home from camping and their schools are to begin tomorrow. (T.S.R. 50. 2 P.M. 85. S.S. 67.)

Aug. 8. Tuesday. Mr. Jones failed to come to cook this morning and Mrs. Jones is sick in bed. Hannah had early begun her washing, so

1899. while the boarders were waiting for breakfast, she had to leave the washing and go to cooking. It will make it very hard for her. Received a letter from Will Cooke and wrote to Humboldt Co. children. Mr. Cooke tells of the long search of Weldon and himself to find a boarding - place for Weldon, as he wishes to enter the Lick School in San Francisco, and has been trying to find a place where he could work for his board, so as to help pay expenses. When they were about to give up in despair, they were directed to a Boy's Home on Howard St. No. 1914, and when they came to the place they found it was kept by a man named Hutchinson, to whom Mr. Cooke had once done a favor, for which he was glad to repay him, and he said to Mr. Cooke, "your boy can stay here just as long as you wish him to, if you will clothe him and furnish him books." He has fifteen or more homeless boys under his care, and to support them he prints a paper called "Our Youth" and does other job printing, and depends on the charity of people for the rest - Muller - like, trusting in God. He helps these boys to find places for work and cares for them like a father. I shall subscribe for his paper to help him along. Surely we feel that the hand of the Lord was in this providence, directing them to this place. (T.S.R. 50. 2 P.M. 85. S.S. 70.)

Aug. 12. Saturday. Received a letter from Calvin and wrote to the children in the East. Have had another visit from Dr. Hull. I have so little vitality that my temperature is now below normal. The Dr. says when he first saw me he thought I was going to have typhoid fever. I do not think he understands my case at all and wish Dr. Barbour was at house. (T.S.R. 50. 2 P.M. 78. S.S. 70.)