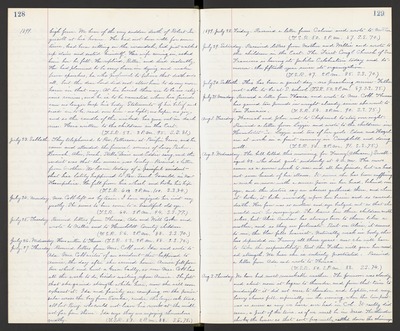 1899. high fever. We hear of the very sudden death of Robert Ingersoll at his home. He had not been well for some time, had been sitting on the verandah, had just walked up stairs and seated himself. His wife coming in, asked him how he felt. He replied, "Better", and died instantly. He had planned to be very brave in dying, and make brave speeches, he who professed to believe that death ends all, but the dear Lord did not allow him to do any more harm in that way. At his burial there are to be no religious services, and he is to be cremated when his friends can no longer keep his body. Statements of his belief and "creed" are to be read over him - no light, no hope, no joy, and so the candle of the wicked has gone out in darkness. Have written to the children in the East. (T.S.R. 52. 2 P.M. 95. S.S. 81.)

July 23. Sabbath. They telephoned to Rev. Patterson at Pacific Grove, and he came and attended the funeral services of Leroy Parker. Hannah, Alice, Sarah, Stella Drais and Eddie sang, and the verdict was that the music was lovely. - Received a letter from Mother. We learn today of a painful accident that has lately happened to Rev. Saml Gerould in New Hampshire. He fell from his wheel and broke his hip. (T.S.R. 60. 2 P.M. 100. S.S. 84.)

July 27. Thursday. Received letters from Mrs. Cobb and Ida and wrote to Ada. Mrs. Cobb writes of an accident that happened to Annie, the day after she arrived home. Annie fell from her wheel and hurt a knee badly, so now Mrs. Cobb has all the work to do, besides waiting upon Annie. She felt that she gained strength while here, now she will soon exhaust it. Ida and family are camping on the peninsula across the bay from Eureka, under the large oak trees, all but Benj. who could not leave his work at the mill not far from them. Ida says they are enjoying themselves greatly. (T.S.R. 53. 2 P.M. 88. S.S. 75.)

July 29. Saturday. Received letters from Mother and Willie and wrote to the children in the East. The First Cong'l Church of San Francisco is having its Jubilee Celebration today and tomorrow - the fiftieth year since its organization. (T.S.R. 47. 2 P.M. 85. S.S. 70.)

Aug. 1. Tuesday. Hannah and John went to Chaparral to stay over night. Received a letter from Lizzie and wrote to the children in Humboldt Co. Lizzie and two of her girls - Edna and Hazel are at work in a fruit cannery in Campbell and doing well. (T.S.R. 50. 2 P.M. 91. S.S. 75.)

Aug. 2. Wednesday. The bell tolled this morning for Fanny (Athearn) Swett - aged 42 - who died quite suddenly at 4 A.M. The news came as a severe shock to me and all her friends, but we had not even heard of her illness. It seems she has been suffering a week or more with a severe pain in her head, behind one eye, and the doctors say an abscess gathered there, and when it broke, it broke ruiwardly upon her brain and so caused death. Her face was so swollen and eye bulged out so that she would not be recognized. She leaves her three children motherless, but Alice Andrew has always been to them like a mother, and so they are fortunate. But on Alice, it seems to me, the blow falls heaviest. Naturally weak in body, she has depended on Fanny all these years - now she will have to take the responsibility. But the Father will give her needed strength. We hear she is entirely prostrated. Received a letter from Ada and wrote to Theresa. (T.S.R. 50. 2 P.M. 88. S.s. 74.)

Aug. 3. Thursday. We have had most remarkable weather. The forenoon was cloudy and about noon it began to thunder, and from that time to midnight it did not cease to thunder and lighten, and very heavy showers fell, especially in the evening, when the tim just was as severe as any we have ever had in Cal. It really did seem, a part of the time, as if we must be in Mass. The thunder shook the house so that soot frequently rattled down the chimneys.